Revolt By The Masses Destroys Civilization 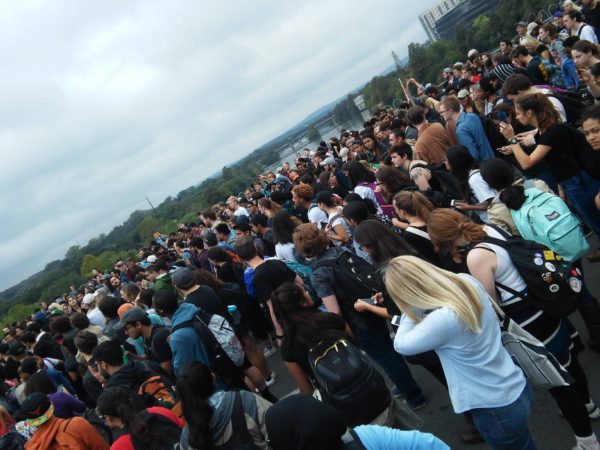 Humanity existed in a “knowledge bubble” for the last few centuries, having discovered enough to draw dangerously over-broad conclusions, but not enough to see what was actually going on. As more information comes forth, the old theories die, and we rediscover traditional wisdom. Recent archeological evidence affirms the Platonic, Spenglerian and Evolan view of civilization collapse:

Researchers in Guatemala have found evidence of a 1,200-year-old massacre in an ancient city called CancuÃ©n, the capital of one of the richest kingdoms of Maya civilization. The discovery, deep in the jungle of highland Guatemala, provides a snapshot of the Maya civilization as it began to collapse.

Precious adornments found near and on the skeletons â€” including jade, carved shells and jaguar-fang necklaces â€” led the team to conclude that the people massacred had been nobles.

Civilization collapse is brought about by success. Civilization is, after all, organization of humanity. Specialization of labor and economies of scale lead to greater efficiency and thus wealth. At that point, many who could not survive without civilization are able to survive, and eventually, they rebel against civilization — because by definition, they do not understand it or that it requires leadership and hierarchy — and in doing so, destroy it.

As part of this process, they kill off the nobles. Scapegoating the nobles is easier than accepting the basic problem, which is that there are too many people with not enough to contribute in terms of productivity. From Ancient Maya: The Rise and Fall of a Rainforest Civilization, by Arthur Demarest:

Another basic question regarding the collapse, decline, or transformation of the lowland cities and kingdoms at the end of the Classic period is why in many areas Maya leadership did not respond with effective corrective measures by the stresses generated by internal, as well as external, factors. Cross-cultural studies of culture change show that “complex societies are problem-solving organizations, in which more parts, different kinds of parts, more social differentiation, more inequality, and more kinds of centralization and control emerge as circumstances require” (Tainter 1988: 37).

Yet the K’uhul Ajaw failed to respond with effective corrections of infrastructural problems. Their ineffectiveness was most likely due to the canons of Maya leadership and its limited range of action. The elites of most Classic Maya kingdoms, in general, did not manage subsistence systems or production or exchange of utilitarian goods. Most Maya polities, while held together by the rituals and authority of the center, were decentralized with local community or family-level management of most aspects of the economy. This decentralized system facilitated adoption of farming systems to the local microenvironment (e.g. Dunning et al 1997; Dunning and Beach in press).

[H]aving their role defined in terms of ritual and inter-elite alliance and warfare, it is not surprising that the K’uhul Ajaw responded through these same mechanisms to problems such as demographic pressure or ecological deterioration. They naturally reacted by intensifying ritual activities, construction, or warfare — the activities within their purview.

Plato points out the same thing: drones are left to manage their own affairs locally, in accord with natural selection. Given help by civilization, they grow in number, and then blame others for the local results of this overpopulation. They want their leaders to fix the problem caused by their own acts, which is classic scapegoating.

We can see in our world today that different types of civilizations have different types of governments. The third world favors kleptocratic strongmen; the “second world” has token political leadership, and local leadership by mafiosi; the first world prefers organized governmental systems which take on attributes of the other two systems based on the degree of decline. In other words, civilization is a spectrum from primitive to complex structures.

The rise of overpopulated drones creates a large audience for third-world style government. They cannot manage themselves, and want government to do it instead, so they depose their leadership and replace it with managerial government. This in turn exhausts the elites, who by taking up their traditional roles in the ensuing government have become slaves to managing unruly and self-destructive children, and they fade away as a result of this existential stress and misery.

Babysitting of this nature is the hallmark of declined or declining civilizations, and represents the root of Leftism, which is an organized form of Crowdism or the collective defense of individualism, which is what everyone who wants to be managed desires. He wants to avoid having to make reality work for him, and instead be told what to do in some things so that he can do whatever he wants everywhere else.

Without being cruel, we might refer to those who need to be managed as incompetents. They cannot take their small local farms and make them work, mainly because as a group, they have reproduced too frequently to sustain themselves. Those who need to be managed desire strong government to be accountable for their welfare, usually through wealth redistribution since they cannot produce wealth locally owing to overpopulation, and their political actions inevitably involve killing off the elites to take their wealth.

Since they are incompetent, and mismanage their own wealth, their seizure of wealth produces a temporary boom — including more population — and then a consequent crash, much like happened after the French and Russian revolutions.

By the time western conquerors arrived, the Mayan civilization was in full decline, which meant that it had a few ceremonial elites of a weakened nature and many peasants. The Spanish were able to overthrow this empire with only 500 men, many of whom were sick with jungle diseases, because the peasants saw an opportunity to further depose the elites. In so doing, they conveyed themselves into slavery, from which they “liberated” themselves in the early 1800s, promptly becoming a third-world society ruled by disease, corruption, unsanitary conditions and crime.

In the first world, we overthrew our elites during the years 1916-1968 by removing their political and economic power. Since that time, we have been ruled by incompetents. In principle and in result, our actions achieved the same end that the Maya did.

From this example, we see that civilization collapse comes about through lack of hierarchy. Leadership does not micromanage its people; it handles the bigger questions of diplomacy, war and cultural direction. As a result, it is always caught by surprise when the incompetents gang up on it and others, in fear of violence, go along with it. Then those others must suffer under rule by tyrants, fools and criminals.

The perpetual rallying cry of the incompetents is “equality.” They realize they are bankrupt, and want to take from others to subsidize themselves, thus become parasitic because civilization depends on hierarchy to exist. As long as one allows the quest for equality to continue, the health of the society will plummet until it reaches third-world status.