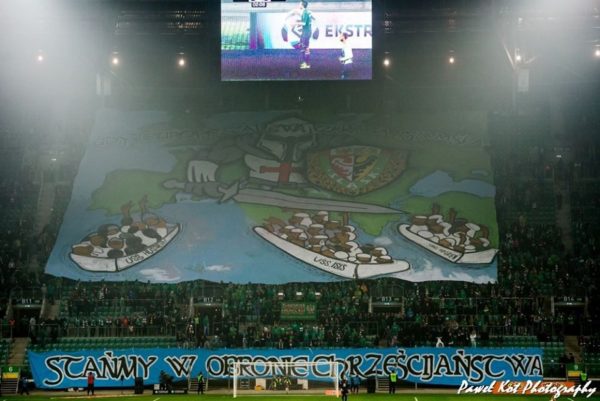 Many of us in the New World view soccer as a sport like golf: a lot of waiting, wandering, and agonizing over what is in the end calculus a few well-timed taps to a ball to make it go into a target. We do not get it. Also, we do not want to. However, for much of Europe, soccer (they call it “football,” which seems not entirely non-descriptive) serves as a form of social bonding.

As part of this, social issues invade the soccer pitch. When sports bring men together, men see those sports as an expression of their culture, and so national pride comes out as it did with this banner, which proclaims (roughly) that immigration is a bad idea, Muslims are going to destroy Europe, and Europe should unite behind Christianity to stop this process.

It is a cheerful sign of the discontent, insurgency and political upsets to come.