Our Political Elites Are Effete Communists 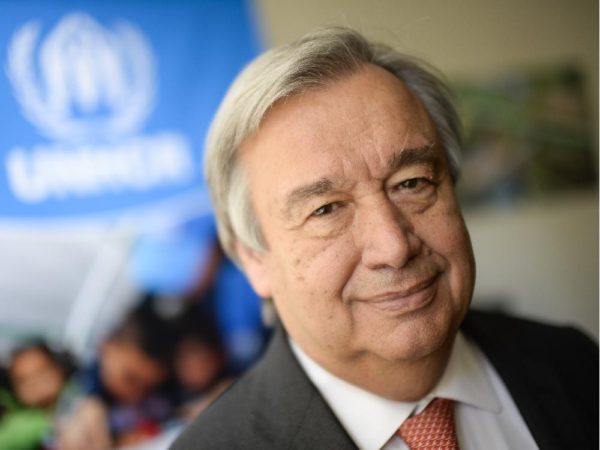 Meet Antonio Guterres, the Secretary-General designate of the United Nations. He is here to teach us an important lesson: that most people tend toward “sweet evil” when given any kind of power.

This is not a direct attack on Mr. Guterres, who although he is a Communist deserving a helicopter ride, is the effect and not the cause of the problem. The problem is that people are monkeys, and monkeys do what makes other monkeys like them, and this leads them to pick things which signal a good appearance.

However, in reality, that which looks “good” in a social context is not actually good, but merely a convenient fiction that makes everyone in the group look safe. In this way, the word “good” is misleading, because what is good to human intent is not good in terms of end results.

And so you have two choices: either have the best oppress the rest, or the rest will oppress the best. Since we have chosen the latter system, we have clueless people like Antonio Guterres people in power.

From his official biography:

As president of the European Council in early 2000, he led the adoption of the â€œLisbon Agendaâ€ and co-chaired the first European Union-Africa summit. He was a member of the Portuguese Council of State from 1991 to 2002.

For many years Guterres was active in the Socialist International, a worldwide organization of social democratic political parties. He was the groupâ€™s vice-president from 1992 to 1999, co-chairing the African Committee and later the Development Committee. He served as President of the Socialist International from 1999 until mid-2005. In addition, he founded the Portuguese Refugee Council as well as the Portuguese Consumers Association DECO, and served as president of the Centro de AcÃ§Ã£o Social UniversitÃ¡rio, an association carrying out social development projects in poor neighbourhoods of Lisbon, in the early 1970s.

Social justice is “sweet evil”: it makes a group, especially of women, feel better immediately because it is a chance to “do good” without — and this is the key, right here — actually changing our own lives so that we are oriented toward doing good in every area every day. Sweet evil is tokenism, like scapegoating and other human evils.

Right now, Guterres is advancing the agenda that has paid his bills for the past nearly forty years, which is Communism plus multiculturalism. Here he is on the topic of losers in globalism refusing to take in refugees:

He said the world must re-establish international protection for refugees coming from war zones such as Syria, but it would not be easy as developed countries were turning to nationalist agendas.

Europe has struggled to handle a huge influx of refugees, many of whom displaced by the war in Syria. The United States has accepted only a very small number of refugees and may take in even fewer next year.

…”But a lot of people were left behind … In the developed world, (there are) those who have been losers in globalization,” he said. “The recent analysis of the rust belt in the United States, I think, is a clear demonstration of that, when we speak about the elections.”

Read between the lies: good Communists want to take in as many refugees as possible into Europe, which will destroy that civilization and replace it with extreme Leftism. The only people who oppose this are losers who could not hack it in globalism, which means they are weak and obsolete and need to get the Darwin treatment.

You can see the same technique in use by Communist propaganda organ The New York Times in their story The New Workplace Is Agile, and Nonstop. Can You Keep Up? Translation: join in with our insanity, or you are weak and should be destroyed.

The interesting thing is that Communists are never challenging themselves with things like surviving alone in the forest or writing a great symphony. No, the only challenge is conformity itself, because that way you are replacing your mind with the agenda of the ideology, and this means they can control you.

â€œThe idea that management of migration is a matter of national sovereignty is extremely limited. The truth is that in the meantime, the real controllers of international mobility are the smugglers and criminal organisations. It must be recognised that migration is inevitable and will not stopâ€, the socialist told the crowd of policymakers and researchers.

…Despite having used the word â€œburdenâ€ to describe giving residence to large numbers of aliens, the 67-year-old went on to declare: â€œWe must convince [Europeans] that migration is inevitable and that it is the multiethnic societies which are multicultural and multireligious who are building wealth.â€

…He stated: â€œWhen elected officials hesitate to choose between values and the next election, I would advise them to choose values. If they go for short term [electoral gain] they will lose both, because there will always come a time when they lose an election At that point, it becomes very hard to recover the values that have been abandoned.â€

Translation: when you act like a good Communist, the Party always has your back. If you do not go along with the herd, they will conspire against you in elections, where — as is the norm in Leftist visions of democracy — the dead will rise and vote alongside illegal immigrants, felons, cartoon characters and fake Twitter accounts.

As the West slowly awakens to the fact that it has been taken over by a regime as ruthless and incompetent as the USSR, the first task upon us is to hold our elites to account for their reality-denying ideological message and the further Sovietization that it holds in store for us.

Translations (#1) | Leftism Is A Mental Disease