by Jonathan Peter Wilkinson on October 27, 2020 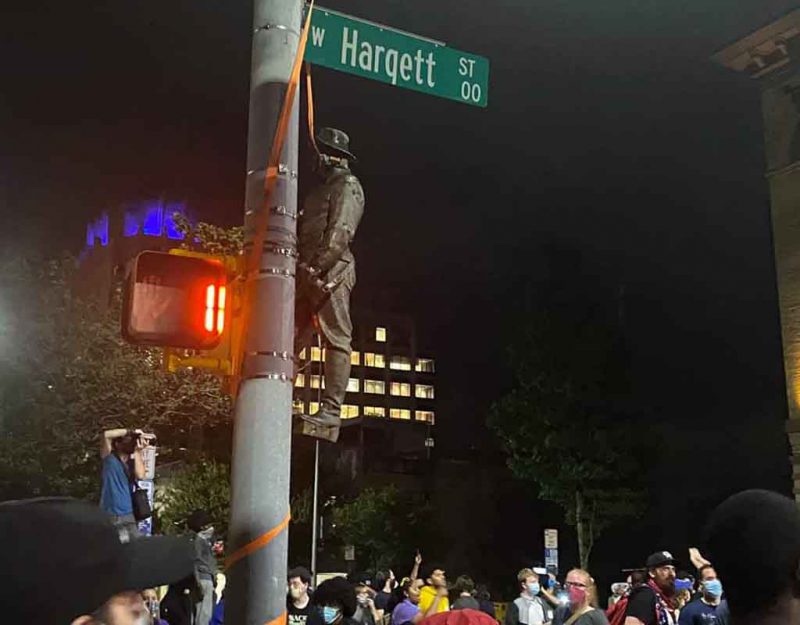 Every so often a blogging comment section isn’t analogous to the chum box slowing down the load times on your favorite conspiracy web site. With Disqus, it will slow your load time. However, quite recently; the wait for load time was worth it. I was asked a rather intelligent question. Just what is an NPC?

I got asked this because I assumed general community knowledge not in existence throughout the entire Amerika.org reading audience. In this case, I assumed that everyone had seen their fair share of dank NPC memes. That not being the case, I offered the following as a shorthand definition.

NPC comes from gaming. It is a non-player character. A person who plays a role but has no real individual volition.

Now having said that, I can anticipate several more logical questions and will attempt an answer. The recent phenomenon of the utterly gormless NPC is worth accounting for to better understand the pernicious affliction known as crowdism that erodes functional republics into demotism. For today’s piece, let’s ask a question. How does someone born with free will unilaterally surrender volition? To motivate that answer, listen to the following?

You may well hear two things. There is a sense of aimless dissatisfaction, and an obnoxious sense of entitlement to meaning. The NPC protagonist in the song is an obnoxious prat of a tosser. Listen to this rant and walk away with the sense that our antiheroic protagonist expects us to provide him a why. Perhaps he expects that why to arrive in the mail after the EBT Card has been charged up and somebody who cares has sent over the Hookers-N-Blow. He’s just the sort of guy Paul Bunyan or Davy Crockett would have beaten to a pulp with a blunt, heavy sledge.

But there’s a wee bit more to the story. Humans aren’t born being that unmotivated. Those that accidentally are don’t enjoy a fifth birthday in any place that is close to a state of nature. Laziness, be it physical, mental or moral; will give you back exactly what you put into it. Nothing. Simple Darwinian evolution would make the challenged human being do something to earn remuneration, affection, and respect.

Figuring out why the dog doesn’t hunt, so to speak, gets us deep into The Dismal Science: economics. Underlying the entire discipline of economics like the mat at your local gym is the concept of incentive. Put crudely, people do what gets them paid, they do gets them laid. Pay them and hook them up, and you can make them behave like utterly useless buffoons. This uselessness will continue as long as the NPC remains oblivious or shameless enough to put on the idiot show in return for sensual rewards on the lower rungs of Maslow’s Hierarchy of Needs. It seems like money for nothing until the NPC realizes what it actually costs him.

There is a certain temptation not to care that the NPC doesn’t try to care. Let them just sail and hope their next voyage ends up like Fredo’s fishing trip in one of the Godfather movies. Maybe the NPC can be eaten by Jonah’s Whale without the disgusting regurgitation miracle a few verses later.

But there is also an appositional incentive to whack that NPC hard over the head with the blunt and heavy Clue-Mattock. It appears when your personal altitude becomes dependent in some measure on his demotivated, atavistic trudge through a pointless existence. You then suffer the negative externalities of the NPC not doing their part.

So who would actually want that guy on the team? Who would incentivize their lack of volition? That would be someone who cheers “Fail to The Deadskins.” NPCs are integral to making some other guy’s team continuously and contemptibly underperform. NPCs are created for the same reason Banzai Trees get bred to be Banzai Trees. The Managerial State has found that drunk and stupid Halflings are easier to herd through the chute then are free and resilient men.

NPCism is a transaction between lower-ordered people and a malignant managerial state. The NPC gets a fun and jolly existence at the drone factory. The Managerial State gets a dependent little sheep who will never rock the boat. It’s a bargain that gains in popularity until you get the brave new world full of amoral, sated cowards. This is one of several evil trends that explains why we are increasingly surrounded by NPCs in Modern Amerika.