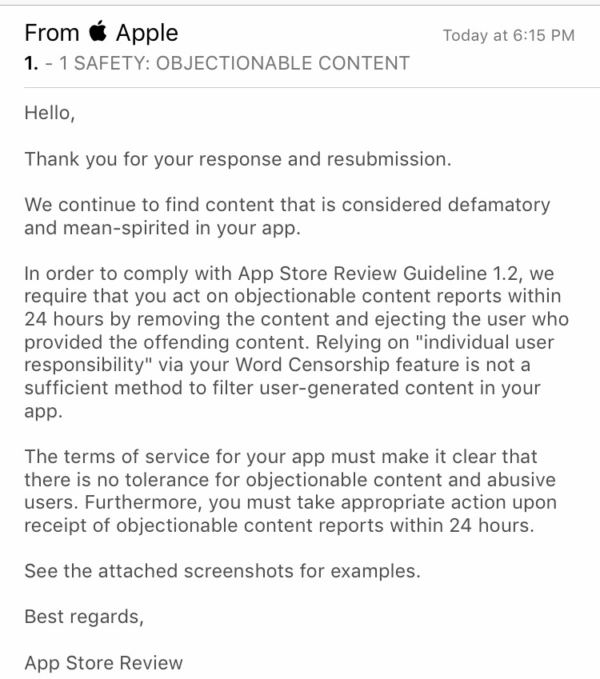 Apple sent this message to a developer. It essentially states Silicon Valley policy: if enough people complain about something, the user who posted it must be destroyed.

This is typical Leftist crowd-oriented thinking. It enables any group that can muster a handful of complainers to destroy someone else, no matter how much time and effort they put into their content, and how much of it previous to that time was inoffensive.

Soft totalitarianism of this nature occurs whenever human individuals become too powerful as a mass, instead of being regulated by a hierarchy and values system.

The FANG companies — Facebook, Apple/Amazon, Netflix and Google — control most of the internet because they regulate its traffic. Sites not listed in Google disappear. Companies whose apps are rejected by Apple die out. Keywords and hashtags filtered by Facebook vanish.

The age of government censorship may not be over, but with “virtual spaces,” our public areas are owned by companies who have no obligation toward “free speech” under the law. As such, as they get more powerful, they will remove anything that threatens them by making their properties less valuable.

An obvious solution is to decentralize: go back to a web of RSS, blogs, independent sites and open protocols like USENET and IRC. Get away from big sites who hope to make money off of us as content providers, and then delete that content when someone whines.

How To Replace Obamacare: Remove The Healthcare System Entirely | Outliers (#42)