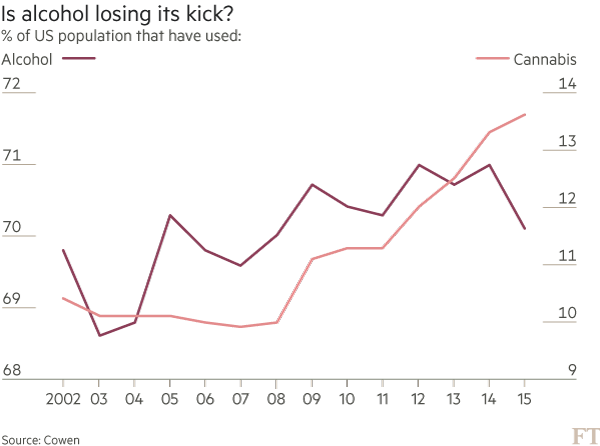 From the Financial Times comes the recognition, unwelcome to Leftists, that government legalization of formerly illicit substances causes a massive increase in their use.

As we say around these parts, “What you tolerate, you get more of.” Legalization is a form of tolerance, but a more potent form is creating a carrot/stick reward system.

These “Control” systems have a similar pattern: people are manipulated individually through reward and punishment by treating them as identical units, depersonalizing them and driving them toward a lowest common denominator. This breaks their spirit and makes them obedient, which to the type of incompetents chosen in modern societies, seems like success.

These systems create obsessive behavior by promising a reward that is never fulfilled, and making any other option seem intolerable. Control systems create a “game” that replaces reality by social mediation. People are addicted to games, and this creates a compulsive mentality where a small group takes over society as a result of its obsession.

Like rats in a lab, gamblers in Vegas do the same thing over and over again, and are constantly watched, measured, and studied. Millions of dollars depends on it.

Casinos are not the only businesses to take notice and profit from the study and manipulation of human behaviour. Smartphone companies also rely on the same discoveries about human nature. They also seek to promote a style of consumer behaviour that, at its most engaged and profitable, looks a lot like an obsessive compulsive disorder.

…The result is a matrix of similarities between problem gambling and problem smartphone use, which is even evident in the economics, as casinos and many smartphone applications make their greatest profit off a small portion of â€œbig fishâ€ users, who are hooked and pulled from the vastly larger set of casual users.

These obsessive-compulsive nature of these pathologies create negative feedback loops where people expect something good, and receive something less good, but because no other option is tolerated, they keep pursuing the one option open to them. This is the end result of setting up games with binary carrot/stick reward/punishment control systems.

This is the nature of modern society. By making individual intent the mediator of reality as The Enlightenment™ prescribed, our society has replaced the question of results-in-reality (consequentialism) with the question of appearance to others (collectivized individualism). This creates the game-playing that in turn fosters the obsession, turning society upside down as herd panic takes over.