Cocktail party conversation, the natural camouflage of the dramatic ego, often ends with: “I just can’t see it that clearly. I believe this issue is not black and white, but in shades of gray.” It sounds so lovely, a way of defending ourselves against the finality of judgment we come to expect from nature “red in tooth and claw.”

But when it comes to thinking, modern people only give lip service to shades of gray. They also cannot think beyond a linear absolute, where there’s one extreme and then the next, with no variation in the middle. We sometimes refer to this with metaphors of a swinging pendulum, but I think it’s simpler.

Our interaction with society is defined in “us and them” terms. They require that we be socialized and take care of each other, so we fight back with what we want. As a result, we see our needs versus the needs of “them,” which is a symbol for whatever group of our fellow partially evolved monkeys is pressing us to do something we don’t want to at the time.

We don’t have shades of gray because we know that inevitably, us and them come down to a messy compromise. There’s your gray. In the meantime, we need to find some extreme position and take it so our negotiation advantage is highest. You know, good hagglers always ask for a ridiculously low price, and then give in slowly so the price walks up to one that is both reasonable and realistic.

One of the biggest issues of our time, race, is a subset of another issue — class warfare. We are appalled by the idea that we, as individuals, cannot be whoever we want to be. As a result, we create a bargaining position where we demand the right for all individuals to be whatever they want to be, regardless of their actual ability. 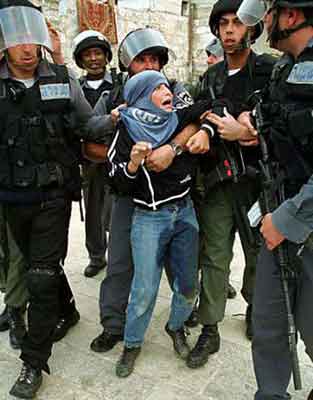 This is why we love rags-to-riches stories: it could happen to us. This is why we love revolutions: we could use liberation from our lives, and it would be psychologically easier if we could blame an Oppressor for all of our failings. We love the idea of becoming something new in the span of a movie or novel. And to have this right, we demand it for all others, so They are working for Us.

Race is a classic example of this logic. The issue becomes redefined in personal terms, of fairness and justice, and immediately we leave behind all logical considerations. This is why the pendulum swings so wildly on this issue: we see it as a personal threat, and a chance to appear more altruistic than others, and make Them work for Us more rapidly.

After all, if you were of a minority, how would you want to be treated? It’s like a television commercial: which product would you prefer, if you were this person on the screen? Even more, it’s a social question: how do I make my guests comfortable, what tokens do I extend to them?

Check out this inversion of the classic Hollywood story — and yes, that’s why you’re not hearing much about it. It doesn’t make a good story of successful revenge. Instead, it tells us that appearances are not reality, and our moral zeal often is a bigger oppressor than our amoralism:

Authorities have said Finley, Crostley and McClelland were friends who drove across the Oklahoma state line for beer in September. They argued on the way back about whether Finley was too drunk to drive, and McClelland got out of the car to walk home.

Authorities had alleged that Finley then ran down McClelland, whose body was caught under the truck and dragged about 70 feet (20 meters). His mangled body was found along a country road.

The racial implications of the case reminded some of the murder of James Byrd, who was chained by the ankles to the bumper of a pickup truck and dragged to death in 1998 in the east Texas town of Jasper. Three white men were convicted of killing him; two are on death row and the other is serving a life term.

The case had been unraveling in recent months because of a lack of eyewitnesses and physical evidence. Last month, a gravel truck driver gave a sworn statement acknowledging he might have accidentally run over McClelland.

Murder charges were dropped at the prosecution’s request Thursday.

I’ve put paragraphs in chronological order. Incident happened; everyone assumed it was a race hate crime; men were charged and thrown in jail for a year; then, authorities discovered that the image they were conditioned to see was very far from reality.

End result: two guys who were obviously not racist because they were good pals with a black dude are thrown in jail for a year, have their names smeared, and racial unrest makes an uneasy spectre at every dinner party. Finally, bureaucracies which are just as dumb and oppressive with a liberal bias as they are in movies with a conservative bias, in a fit of self-awareness, call off the stupidity.

We cannot think in grey or three dimensions about race.

We have a linear scale, from Oppression to Freedom, and that’s all we see. That’s our Us/Them bargaining balance again.

We cannot think that the races would be biologically different, and therefore different in abilities and inclinations, but that we would not oppress them as a result.

We cannot think that the races might be free, and problems might arise from something other than oppression.

Confirmation bias refers to a type of selective thinking whereby one tends to notice and to look for what confirms one’s beliefs, and to ignore, not look for, or undervalue the relevance of what contradicts one’s beliefs.

This tendency to give more attention and weight to data that support our beliefs than we do to contrary data is especially pernicious when our beliefs are little more than prejudices.

We cannot think that diversity (technical term: multiculturalism) is anything other than freedom. Even more, we cannot think in the shades of gray that different communities might be… different. We want the same rule applied everywhere, so it’s safe and fair, like installing the same fast food in every town so we’re never without a Big Mac if we want one.

As a result, we’ve put a filter on our minds that kicks in before we even read or assess what’s going on. Does it resemble this pattern from a movie? Then it must be so. Smash oppression, vote for freedom! It’s like tired dogma repeated by exhausted armies of totalitarian regimes, except since we think we have freedom, we believe that we do.

And from the other end of the spectrum, people with research-oriented focus are slowly chipping away at our sacred cow of linear absolutes in thinking about race:

New research indicates that natural selection may shape the human genome much more slowly than previously thought. Other factors — the movements of humans within and among continents, the expansions and contractions of populations, and the vagaries of genetic chance â€“ have heavily influenced the distribution of genetic variations in populations around the world.

In recent years, geneticists have identified a handful of genes that have helped human populations adapt to new environments within just a few thousand yearsâ€”a strikingly short timescale in evolutionary terms. However, the team found that for most genes, it can take at least 50,000-100,000 years for natural selection to spread favorable traits through a human population. According to their analysis, gene variants tend to be distributed throughout the world in patterns that reflect ancient population movements and other aspects of population history.

When the team compared closely related populations they found few large genetic differences. If the individual populations’ environments were exerting strong selective pressure, such differences should have been apparent.

What they’re telling is that evolution, from start to finish, has been an elective move.

Early hominids elected to make fire and live in caves, so they ended up separated from their friends who wanted to live in the more prosperous jungle.

Individual groups have gone away from the cradle of civilization so that they could follow a vision of their own. They chose to geographically isolate themselves; there’s no place on earth people cannot get to, but if a group wants to stay isolated, they’re able to do it. When we see a geographically isolated group, we’re seeing the hand of human beings wanting it that — and since it happens over many generations, it’s for a good reason.

Each group is the way it is because somewhere they were created to be different and to escape the rest. Why? So they could do it their way. It’s no different than families moving to the suburbs. They want to live as they want to live, apart from the mass of confused people in the city.

Except in evolutionary terms, the cities were the naturally prosperous areas that were not geographically isolated — and the suburbs and countryside were places where groups could set up their own standards, and evolve according to them, shaping themselves in the process. Which came first, the culture or the genetics? Probably some nascent form of the culture.

Our modern dialogue doesn’t see this shade of gray. It also doesn’t see any third dimension to the issue. In addition to oppression and freedom, we need to consider practicality and identity — because identity is the cornerstone of culture. And culture is the only thing that can resist the dual threats of corporate/bureaucracy stupidity and trends that cause a lynch-mob mentality.

How it got this bad | Bisphenol-A: why no one is surprised