Back in 1965, Amerikan Leftists decided the way The United States handled immigration via quotas didn’t produce significant enough levies of far left voters and desperately poor workers. They therefore decried it as — you guessed it — ¡RACIST!

In place of that policy, they enacted the Hart-Celler Act of 1965. This act had the following impact on US immigration numbers. 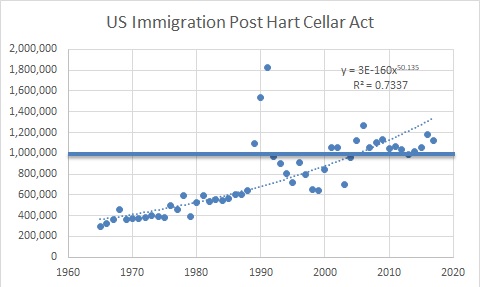 Compared to almost entirely European immigration under the national-origins system, flows since 1965 have been more than half Latin American and one-quarter Asian. The largest share of today’s immigrant population, about 11.6 million, is from Mexico. Together with India, the Philippines, China, Vietnam, El Salvador, Cuba, South Korea, the Dominican Republic, and Guatemala, these ten countries account for nearly 60 percent of the current immigrant population.

The chart above shows a steadily increasing flow of immigrants into our country. So much so that out of the 17 years in which more than one million new people immigrated here legally, 11 of those 17 years have occurred since 2005. This data only accounts for immigration that legally occurred IAW the guidelines set forth under the Hart Celler Act of 1965.

Tack on anywhere from 10 to 25 million illegal immigrants and assume they are from pretty similar points of origin to the legal ones to get a sense of the true extent to which immigration is forcing change upon our nation. The Hart-Celler act followed the Leftist plan of fundamental transformation, changing demographics thoroughly:

In the decades following Hart-Celler, America experienced drastic changes in both the numbers and origins of immigrants. The number of immigrants entering the U.S. after 1965 rose significantly, from approximately 250,000 in the 1950s to 700,000 by the 1980s. Doors were opened to large-scale immigration from Eastern Europe, Asia, Latin America, and the Caribbean, where extremely motivated immigrants took advantage of the family reunification provisions of the law to engage in chain migration, bringing an average of 2 relatives to the U.S. for each new green card granted. Within a few decades of Hart-Celler, family unification had become the driving force in U.S. immigration, favoring those who were most determined to move -exactly those nationalities the critics of the Act had hoped to keep out.

This “fundamental transformation” was specifically promised not to happen, but Hart-Celler radically changed demographics despite those promises:

“The bill that we sign today is not a revolutionary bill,” President Johnson said during the signing ceremony. “It does not affect the lives of millions. It will not reshape the structure of our daily lives, or really add importantly to either our wealth or our power.” Senator Ted Kennedy (D-MA), the bill’s floor manager, stated: “It will not upset the ethnic mix of our society.” Even advocacy groups who had favored the national-origins quotas became supporters, predicting little change to the profile of immigration streams.

But other than favorable labor rates, why would you want the proud members of MS13?

Since you can’t quite get away with a final solution, you bring in ¡DIVERSITY!, vote them into a permanent minority, and promote miscegenation through every possible media outlet. So these new immigrants aren’t just brought in. They were brought in and wielded.

But that’s just craziness. Liberals are too good and holy to literally use populations of people as a weapon to keep others down. That’s just Right Wing cray-cray. Oh really? Let’s see what happens when this refreshing stream of humanity gets redirected. Wayne Allan Root calls this Busing with The Stars.

…here’s the most powerful way to end this border crisis once and for all: Make Democrats feel the heat. I’ve recommended for weeks on TV to take every illegal Asylum- seeker already in the USA and bus them to Democrat districts and Democrat politicians’ homes. Suddenly this became the biggest story in America on Friday morning. President Trump obviously listened once again. He is discussing this very idea. Thank you, President Trump. I call my idea, “Busing with the Stars.”

All these famous Democrat politicians, Democrat donors, Hollywood stars and liberal judges claim to love illegals so much. So, let’s test that claim. Fill their neighborhoods, their schools with illegals. How will they react when illegals are climbing the walls outside their mansions?

But aren’t Progressives empathetic to the poor? Don’t they just love the sick and downtrodden? Only when they can use the downtrodden to wipe the mud off their feet. People who love inflicting ¡DIVERSITY! on others like a butt-rape suddenly get concerned over cost issues when it boomerangs back on them.

Cher said she failed to understand how the city of Los Angeles in the sanctuary state of California could afford to admit and take care of any more immigrants when city officials have failed to care for homeless, veterans, and poverty-stricken Americans. “I Understand Helping struggling Immigrants,but MY CITY (Los Angeles) ISNT TAKING CARE OF ITS OWN.WHAT ABOUT THE 50,000+Citizens WHO LIVE ON THE STREETS.PPL WHO LIVE BELOW POVERTY LINE,& HUNGRY? If My State Can’t Take Care of Its Own(Many Are VETS)How Can it Take Care Of More,” Cher said.

Now how would Cher react if Omaha, Nebraska whined about the cost of all the new immigrants? They’d totally be ¡RACIST! Screw their crazy vets. Especially if they are poor, white people. It becomes different when the diversity becomes an old, biblical frog plague bubbling up from the river near one of them.

It is then that we see that they don’t care about any of the immigrants as human beings. They care about them as weapons and disease-vectors. They deliberately shoot them into enemy communities like plague-infested corpses fired over the wall via trebuchet. Mass immigration is yet another Leftist weapon in Amerika’s white on white civil war.

Thierry Baudet And The Western Awakening | One Big Idea