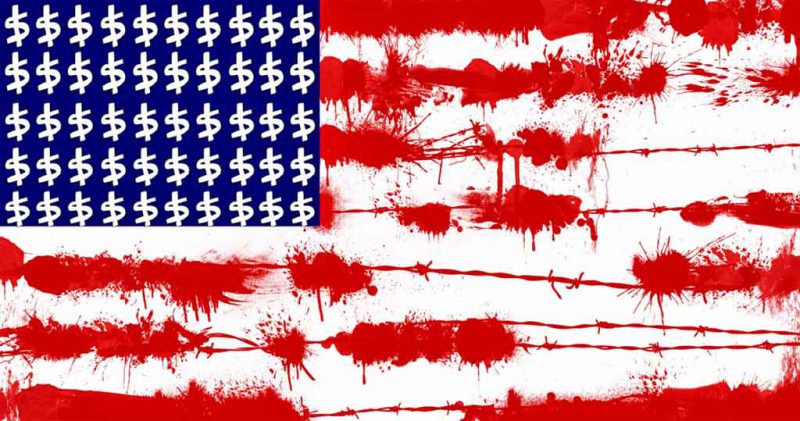 I recall a former high school friend who professed he’d never fight and die for this country. I was taken back but protest I did not. Without investigating as to his reasoning I’ve since come to my own: because we no longer fight for anything real; we are servants of ideology.

Americans (especially electric scooter flag-waving conservatives and raving constitutionalists) bask in the supposed supremacy of our ideas of freedom, liberty, and justice. Stores boast fashions marked with ideological flag-waving imagery meant to stir up reminders of how wonderful, grand, and free America is. Of course, one need only review the slogan “Freedom Isn’t Free” to understand the raging, wild contradiction. Freedom doesn’t actually exist, folks. At least not in a stable, conservative society. But let’s think about this a moment, shall we?

Freedom is a jargon-pidgin term about on par with “and liberty and justice for all.” It’s not real; it’s not tangible; it has no antecedent in nature. Never was nor shall it ever be made manifest to us, whether foreign or domestic. It is a pretty slogan, a political trac, a facade. It is the serpent’s glamorous lie. It serves to keep us marching forward, and to make us afraid of stepping out of line.

Consider how the freedom narrative seduced Boomers into agitating for diversity:

During World War II, Hollywood churned out countless platoon films — like Air Force (1943), Bataan (1943), Guadalcanal Diary (1943), The Purple Heart (1944), Objective Burma (1945) and A Walk in the Sun (1945) — in which multi-ethnic, multi-religious American units banded together to defeat fascism. Notably, African-Americans were absent from these films, as well as from this equation. This was about establishing the whiteness of ethnic Americans — and thus, their fitness for citizenship.

The idea that all our worldly liberalism (that’s the ultimate outcome of “freedom” and “liberty”) is under threat has been pumped out decade after decade by Hollywood films and acts the best of puppet mastery in terms of garnering the young and foolish who desire to preserve the lives they’ve always known. Films about the struggle of war can serve well in revving up the engines of those who enjoy a life, quite frankly, of fair richness. And it deposits this seed that, at any given moment, some foreign criminal with a name that you cannot pronounce is about to wipe you and all your loved ones out.

There is something I can admire and strongly appreciate in the veterans of old; however, it does not (I doubt shall it ever) transfer over to those young men and women of today. The internet has perhaps been the best tool, in regards to globalizing the world, that enacts a positive good. It has since exposed a great many flaws in the matrix system and has lent way to many voices who’ve been on the side of war and have something to say about it. It also helps connect many of us to the blunt fact we are still humans who have inherited a soul given to us by God, and that dancing around aimlessly praising wardogs and their war games is perhaps only slightly irresponsibly sick. I am not against self-defense, if even by ruthless unapologetic means. But I cannot support, as I refer to it, blind patriotism. That’s what many today in America do.

This is an area that I must depart from many right-winged folks. Many believe we are under constant threat of invasion and our “freedoms” float in the balance about as frail as a balloon in a hailstorm. Perhaps that’s true now since we’ve been engaging in terroristic (excuse me, freedom-defending) bloodshed overshadowed by newscaster flaunting their fancy tongues to a public all-hearing and all-unaware to the brute reality at hand. This is not to dismiss authentic threats who believe America, now the Babylonian Whore, must be eradicated. I’m quite confident there are sincere threats who desire our permit rest in graves unmarked. Threats to our border control is currently under severe threat right now as I write these words into the digital arena. But I do not take that to a global sphere where America is the world police and the officials by whom declares all global safety, security and godless justice we pass off as pure and righteous.

Old Glory is dead. She now stands as a monument of days gone by to a world which is no more and shall never again be. That world is dead and Old Glory is an imposter, a zombie, a blood-lit reminder to many foreigners that we are the new British Empire and the sun sets not on our day. For America is the capital of death to many ghost we’ll never give a second thought because it isn’t our sick child who had his legs blown off in that hospital you never heard about. It isn’t your grandmother whose guts were scattered across the dirt by a drone air strike because American officials were too lazy to determine if the phone they were tracking was in the hands of a real known threat, and it certainly is not your most precious loved ones lit on fire at their wedding because maybe there was one bad guy somewhere in the mix. When you celebrate the Fourth of July with pride and posture yourself a fine Patriot, you’re just another sucker to the system of death. You are under the sun that never sets except when setting forth terror and agony.

For some, this is obvious. For others, it is their weak-mindedness and sloppy feminine emotions which halt their ability to discern the adversary from the innocent who just wants to go to the market and purchase dinner for their family later that night but instead, in fact, ends up looking to the sky as fire is called down and they are sent into eternity. The Babylonian Whore seeks whom she may devour while dressed in red.

Consider this: go out today and be careful in your observations. Are there cameras playing spot-the-naughty-American round about every corner? Do you know where all that massive data and feed ends up? Observe your average laymen American. Are they slaves to their own obesity in body, soul, spirit and iPhone? How are we free when much of our reality is dictated by government officials spewing out falsehoods that, in effect, pass laws that we may strongly disagree with but must follow, lest a bullet be put through our brain? How are we free when addiction to our cellular tracking devices is socially acceptable and considered the new norm? How are we free when the First Amendment is actually no longer in effect? How are we free? What does that term manifest to exactly?

Waving Zombie Old Glory is akin to waving the Hammer and Sickle, in my humble view. You are engaging in the celebration of something new that no longer has its root toward the Founding Fathers. Because, as any wise man can easily observe and attest, most Americans are thinking not in terms of what we are and what made us great, but the symbolic ideological reality we have now adopted. Claiming that we are here for liberty, freedom, and justice is akin to saying that we bring equality, just as the Communists did. For liberty, freedom, and justice to work, people have to be fundamentally equal on some level, just as the Communists say they are.

July Fourth is a time when we consider how wonderful it is to have access to food that is killing us, cellphones which track and record us, TV programming which indoctrinates the impressionable and foolish with anti-god and anti-conservative values while promoting the sodomite agenda and whoredom as liberating and freeing from the confinement of tyrannical stuck-in-the-past hands, and continues our decay through means of commercialism, which adds to consumerism enacted nicely with an American flag made in China bought to celebrate our accumulating debt, our future ghost lost to the fury of godless, heartless war and the consequences yet taken in for those crimes.

Is July Fourth a day to celebrate America’s brand of global communism? Well, it certainly isn’t a befitting description of what many hold to in terms of what such celebrations truly entail. After all, are we not merely spreading peace, love and safety and security by means of a totalitarian sense of unity? See the contradiction? Many do not.

Perhaps it’s time to blast the USSR Anthem? At least it’ll be a beautiful tune to wake up to in the morning. Very patriotic, no? And freely hosted in freedom on the free market site YouTube which serves up videos for its Communist founders, for free, as we wave the symbols of freedom and ignore the reality that they conceal.