How The “Service Economy” Created A New Liberal Elite 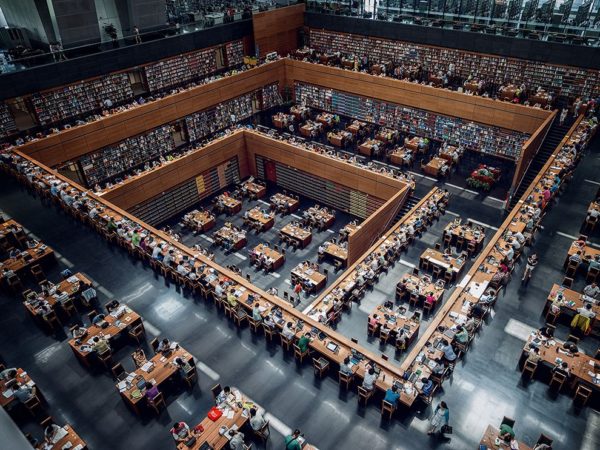 Sometime in the 1990s, when America switched to “globalism” and a “new world order” as its great hope, the American economy changed. It stopped rewarding production, and instead began to reward those who specialized in converting existing assets into services which could be sold to consumers.

This continues to this day. For example, someone might develop an app for a phone that helps sell more cellular phone minutes, or invent a money market fund that returns better than average percentages. They might design a new version of a consumer device to be made in China and sold here.

These jobs resemble sinecures more than anything else because, with the huge staff and redundancy at most large American businesses, people need to go through a credentialing process in education and then repeat the procedures they learned there. Thought and analysis have been replaced by measurement and documented methods.

Once one gets into one of these jobs, it is possible to be minimally competent and still make a lot of money, mainly because the organization behind these individuals has an incentive to succeed, and so all of the associated workers contribute enough to achieve the basics. The lone thinker has been replaced by the hive mind.

This has created a situation where those who are obedient to the system and go into the latest trends and waste their youthful years going through the motions are rewarded, where everyone who tries to just live a normal life finds themselves marginalized and excluded:

In one of these countries live members of what Temin calls the â€œFTE sectorâ€ (named for finance, technology, and electronics, the industries which largely support its growth). These are the 20 percent of Americans who enjoy college educations, have good jobs, and sleep soundly knowing that they have not only enough money to meet lifeâ€™s challenges, but also social networks to bolster their success. They grow up with parents who read books to them, tutors to help with homework, and plenty of stimulating things to do and places to go. They travel in planes and drive new cars. The citizens of this country see economic growth all around them and exciting possibilities for the future. They make plans, influence policies, and count themselves as lucky to be Americans.

The FTE citizens rarely visit the country where the other 80 percent of Americans live: the low-wage sector. Here, the world of possibility is shrinking, often dramatically. People are burdened with debt and anxious about their insecure jobs if they have a job at all. Many of them are getting sicker and dying younger than they used to. They get around by crumbling public transport and cars they have trouble paying for. Family life is uncertain here; people often donâ€™t partner for the long-term even when they have children. If they go to college, they finance it by going heavily into debt. They are not thinking about the future; they are focused on surviving the present. The world in which they reside is very different from the one they were taught to believe in. While members of the first country act, these people are acted upon.

Many have realized by now that our economy resembles a Ponzi scheme, which is why it is so dependent on growth through globalization and immigration to bring in new consumers. We are selling membership in our society as a way to keep its economy afloat.

The downside of this is that we have set up a Soviet-style system where only those who are good at the system itself get ahead, and others — who may simply not want to participate in this soul-killing experience — are excluded and written off.

Those then suffer the policies of the new Elites who, having replaced the WASP elites, base their claim to wealth not only production but on services, which essentially mean consumer services, or pushing paper around to re-sell existing assets and by generating attention for those assets, creating increased demand for them and basing their value on that, not a calculation of utility and actual value.

Some would say this is the end result of usury. Others might point out that it is what happens when a government dedicates itself to funding a permanent underclass and requires an economy which will generate activity that can be taxed in order to pay for that. In other words, a socialist-capitalist fusion made toxic by diversity.

Diversity may go down in history as the death of US/EU. It gave the state a mandate it could use to justify any increase in power, namely that it was still fighting WWII against that evil racist elitist sexist homophobic transphobic patriarchal Hitler guy, and so the state grew.

With that, the state became a big part of industry, and since it was a service, most others followed suit. The result is that we have too many people doing too much which is irrelevant, and very few things that actually make money, with almost everyone chasing those few outlets as a means of profit to escape the mess.

If people seem to be fearful and shaky around you lately, it is perhaps because no one expects this can go on forever. We know that “re-financialization” of the type described above is the sign of a dying industry, not a thriving one. And so we struggle on, waiting for the crash.