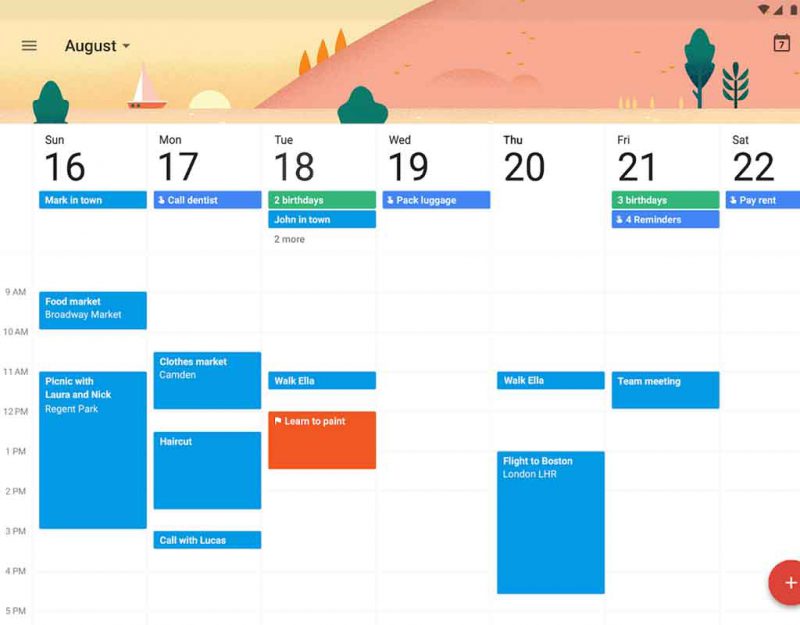 When Google Calendar first came out, Google was a healthy company. It seemed to be leading its industry, having developed a search engine based on the popularity of links that, at that time, worked well, since most people on the internet preferred useful resources to commercial messages.

Small, agile, and quick to move, Google grew rapidly and expanded into many promising new areas instead of trying to dominate existing parts of the market. This provided a welcome contrast to the previous tech giants, who were fighting over market share belonging to a few products (operating systems, office suites, databases, POS, groupware).

It seemed like a new generation brought a fresh view. Google brought out a series of products that seemed like they were always excellent and consolidated previously inefficient methods into new systems: Google Search, Gmail, a translation engine, a news index, an image search, and apps like Google Calendar.

Calendar apps had been a disaster since the dawn of computing because they consisted of programs running on home computers and saving that data. Since operating systems have never gotten a handle on installing a regular backup system that works consistently, data would get lost, and if you got a new computer, you had to re-install the software and possibly upgrade with new operating system versions.

Here in Realityland, we recognize that people do not want to pay for most software because it is old tech. They have already dished out for the computer, like they do a dishwasher or refrigerator, and they expect it to just work for twenty years, including really basic functions that we have known about for fifty years like operating systems, word processors, email, and yes, calendars.

Google Calendar had great promise. Instead of writing down dates on your paper calendar, and then copying those to a new paper calendar every January, you could just enter stuff into Google Calendar. It stored the stuff on Google servers. It never needed an upgrade, and would notify you via email for important events.

Then something went wrong, for Google first: the internet market shifted. The early market consisted of getting the upper half of middle class online, and internet users were working from desktop computers or laptops and generally knew what they were doing.

Around 2007, however, the smartphone age dawned, and soon most users were connecting via phones, using tiny screens, and knew almost nothing about computing or office applications. They needed new, simple, and dumbed-down “apps” to replace those old programs.

This took us back to the 1970s. Instead of the web revolution, where we ran programs on servers so that our operating system differences and which computer we were using that day did not matter, now we were running specialized applications on a new operating system for our phones. Even more, these stored a great deal of data on the device, and not “in the cloud,” a fancy term for saying that you put the stuff on web servers which were virtualized, meaning that you could connect to any one of ten thousand machines and still get your stuff.

Google thought this a smart move; it gave more power to Google, after all, since they now controlled the operating system and the software, and the data. Somehow the same antitrust regulators who had gone after Microsoft slept through this one because, after all, Google was new and shiny and full of hope, and also mostly Leftist. Google took note of this.

Shortly after the great smartphone revolution, in which the big story is how Google seized market leadership from Apple, Google changed. It explicitly adopted Leftist goals, much as Apple had done two decades before with its rainbow logo. It began a hiring spree to include those who were like its new audience the smartphone users, emphasizing two groups.

The first group we shall call “Redditors” for lack of a better term. These are soyboys from the lower middle class who, having gone to college on government money, now consider themselves smarter than everyone else, despite having IQs below 120 points. They memorize facts and are “current” with software development, meaning that they know how to string together object-oriented code using a framework of libraries. Big business loves this model because it is so standardized that you can hire anyone to do it and their code will look very similar, so you can have people leave (very common) or fire them for not celebrating Martin Luther King, Jr. day and no one will be much inconvenienced.

Affirmative action defines the second group. Google became nervous when people pointed out that its staff was almost entirely Asian, white, and Jewish; consequently, it spree hired women, minorities, homosexuals, and transgenders. It also explicitly embraced whatever Left-wing talking point was trending, often with its Google Doodles which adorned the header of each search page. In addition, its corporate overlords began packing the staff with “H-1Bs,” or foreigners — mostly from India and Pakistan — who had IT degrees and would work for a third of what a native hire would.

Neither of these groups had anything in common with the founding Google group, who were people excited about applied technology, or making technology work better according to actual needs out there in the world. The new group resembled the type of people drawn to Hollywood or media: they were interested in what was trending, fashionable, and ideologically literate. They wanted to chase the smartphone audience, who were basically daytime television watchers and “scrollers” who liked to read news headlines and then have hot fresh takes on the talking points of the day for their friends. SJWs, minorities, people on government disability, basement fedora NEET youth, pyjama boys, neckbeard life dropouts, minorities, and neurotics flocked to the platform.

Something happened to the internet audience at this point. The former users, just as happened on MySpace, basically exited, spending their time on social media where they could filter out anyone but people they trusted or were similar to; Facebook rose for this reason, since it allowed easy filtering out of the insane and encouraged the formation of cliques. Google tried three times to make social media work for it, but never could, in part because its web applications reflected “design by committee.” This signaled the death-age of Google.

Enter the crisis of Google Calendar. Now administered to by people who specialize in making little bits of code conform to detailed specifications designed by committee, with no one person ever really assuming responsibility for the applied technology angle, the web application decayed under chaotic changes and a lack of “eating your own dog food,” apparently, since those administering it routinely miss times when it does not work.

Email updates are no longer regular. Entries get dropped with no explanation. Recurring events appear in the wrong places, or after the event has passed. The interface now conforms to “current” specifications, but this means that many functions are missing or nearly hidden. Glitches predominate what was once a solid experience. Now the application is not trustworthy.

Like many of us, I am dusting off the old paper calendar. It may not work well, and in fact means a lot more work, but it is not under the control of some organization which can decay under the careerism of its employees and the lesser grade of employees deemed useful hires by its corporate overlords. It is beyond the reach of regulations, mostly beyond high taxes, and entirely under my control. If that fails, I will have to make my own calendar application and, if it succeeds, sell it to someone who will ruin it.