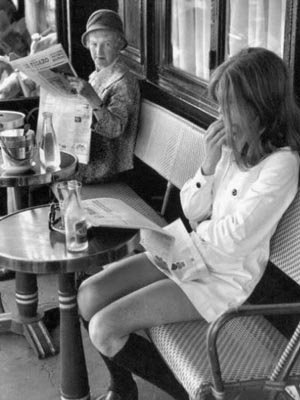 Many people in this world are self-hating. When your society is based on illusions, and requires you to spend a lot of time humbling yourself to those illusions, you tend to hate yourself.

This increases the more you succeed, which is why our wealthy elites are so self-destructive.

Women in the west have it pretty good. If they stumble out of high school with a degree, and stumble down the street to community college to get some kind of certification, they are basically guaranteed a middle class income.

Then the question becomes what more they want out of life. On this point, women are confused.

In comes feminism. A splinter of liberal ideology, feminism demands equality for women. Well, sort of — what it really demands is what men have, under the guise of ideology.

The problem is that it destroys women as well.

Various studies have shown that children raised by a single mother comprise about 70 percent of juvenile murderers, delinquents, teenaged mothers, drug abusers, dropouts, suicides and runaways. Imagine an America with 70 percent fewer of these social disorders and you will see what liberals’ destruction of marriage has wrought.

A 2008 study led by Georgia State University economist Benjamin Scafidi conservatively estimated that single mothers cost the U.S. taxpayer $112 billion every year — in addition to asking the rest of us to keep an eye on their kids while they go clubbing.

We could have had two Iraq wars — Obama could have “saved or created” half a million stimulus jobs — at that price. – Human Events

We have single mothers because all things in nature follow the path of least resistance.

In the case of relationships, this is divorce or perpetual singleton status. When this happens, the children grow up with single moms. If those moms are insane, the dads bolt. If those moms were so drugged on feminist logic that they didn’t realize that not all men are equal, and hooked up with a scumbag, he’ll bolt too. Either way, the single mother ends up bearing the brunt of the burden — because of her own poor life choices.

The root paradox of feminism is equality. It believes that men and women should be equal, except that women are more equal because women, as the “underdog,” need more help to be equal.

For 30 years, the feminists have been pretending that their goal is to abolish all sex discrimination, eliminating all gender differences no matter how reasonable. When it comes to domestic violence, however, feminist dogma preaches that there is an innate gender difference: Men are naturally batterers, and women are naturally victims (i.e., gender profiling).

Starting with its title, VAWA is just about as sex discriminatory as legislation can get. It is written and implemented to oppose the abuse of women and to punish men.

Ignoring the mountain of evidence that women initiate physical violence nearly as often as men, VAWA has more than 60 passages in its lengthy text that exclude men from its benefits.

Women who make domestic violence accusations are not required to produce evidence and are never prosecuted for perjury if they lie. Accused men are not accorded fundamental protections of due process, not considered innocent until proven guilty and in many cases are not afforded the right to confront their accusers. – Town Hall

Like all liberal ideas, feminism favors the underdog and so becomes a jihad/pogrom against those who are doing just fine. That means men.

Unfortunately, this forces the issue. Men now have no recourse except to treat all women as sociopathic parasites and avoid entering in contract with them. Goodbye, marriage. How many Gen Xers managed to get married again?

Here’s typical liberal logic — wanting to have it both ways:

Over the past few years, an alimony reform movement, of sorts, has taken shape across the nation, and now many consider â€œlifetime alimonyâ€ a thing of the past â€” a relic from the days when very few wives worked outside the home. Indeed, most states already have revised their alimony laws, setting limits on the duration and amounts of payments.

But, do these alimony reforms go too far?

In many cases, I think they do. Sadly, it seems that stay-at-home moms and other women with little or no income of their own have lost their voice in state legislatures largely controlled by men.

For me, the arguments in favor of alimony are straightforward. If a woman has been in a long-term marriage, and she has either been out of the work force for decades or has an income that is substantially less than her husbandâ€™s, I believe she needs â€“and deserves â€“alimony in order to maintain a post-divorce lifestyle thatâ€™s at least somewhat comparable to the lifestyle she enjoyed during the marriage. – Forbes

Either men and women are equal, or they’re not.

If they’re equal, neither one should be expected to bear the burden of the other. Child support, maybe; alimony, no.

The woman can go back into the work force and earn a living just like the man is doing.

If the marriage failed, it took two to make it fail. She is as guilty as he is.

Feminism and liberalism don’t want you to think about these things. (It’s paradoxical for a man to be a liberal. Liberalism is defense of the individual against reality; men who are masculine embrace reality and view it as a joyful challenge. If you sit down to pee, by all means be a liberal. But masculine men, gay or straight, have no business being liberal.)

Instead, they want to continue what they do best, which is destroying those who do succeed in order to subsidize those who fail.

Feminism is female self-destruction. In the name of equality, it has put men in a position of assumed guilt. The male response is withdrawal. The female consequence is loneliness, schizoid neurosis and self-hatred.