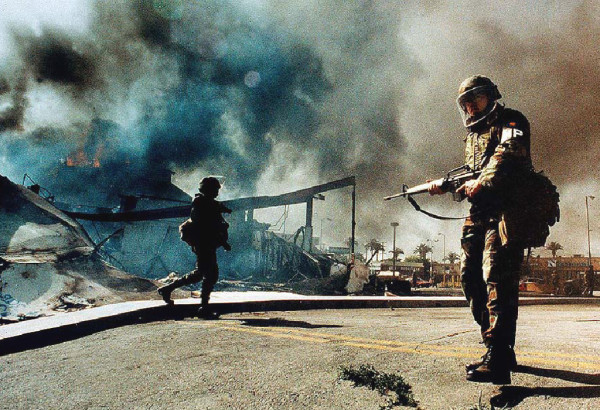 The sun warmed his aching wrist as Don Yu rubbed it. The striking gentle beauty of the balmy July 4 day reminded him why he had turned down several offers at other plants across the country to remain principal operator at the Colusa plant, whose irregular outline he now gazed over. Why go to Utah when he could wake up at work to this every morning?

Like many American citizens, Yu felt a new sense of hope. The political battles of the last few years seemed to be ending, and government was going back to doing what he wanted it to, which was pay for his girlfriend Cindy Martinez to get her degree in nursing so they could get hitched and live in this paradise on earth.

As these pleasant thoughts filtered into his mind (alongside the strong wooden-tasting coffee from the Starbucks on his commute) his eyes caught a speck on the horizon. Whitish, it grew as it came into frame. It looked like one of those drones you can get for a couple hundred bucks at Barnes and Noble or, heck, anywhere now. But it had a thick wire tied around it which dragged after it.

Jesus Markov-Phong, his second in command, joined him on the observation deck. “Shouldn’t do that to a drone like that,” he opined. “Weighs too much, it’ll burn out the motors.” Sure enough, the drone struggled against the breeze.

“Why would–?” Yu began, but his mind slowly dropped out of the pleasant cloud of future ambitions and balmy sunlight. “Wait a second, that’s heading for the transformer. Sound the alarm!”

His call came too late. Groaning under the weight, the little drone flew expertly between the towers — Yu was outraged at first that full maps were available in PDF on the internet, but shrugged it off and used them to impress girls at parties instead — and draped its wire over one connector, then buzzing with the effort, made its final dash as it closed the circuit.

20,000 volts jumped over the short and connected two parts of the machinery that Yu hoped never to see connect. The drone, its circuitry ablaze, dropped over the second line, making the connection fast. Bright blue haze leapt to the lower sky and then spread among the machines as a ripple effect of failures systematically blew out vital parts of the plant.

At central control, a technician watched helplessly as red lights erupted across the board. Four power generation plants had been attacked and nine substations, resulting in a cascade of failures that destroyed equipment, injured workers and promised to take days if not weeks to fix. In response, the Southern California grid also collapsed under the load. “We’ve got full system failure,” he shouted into a phone, but the Governor’s aide couldn’t hear him — the cell phone towers were out of power.

Across the San Francisco bay area, lights went out as generators kicked in at the big data centers. On cue, the children’s crusade began. Twenty-five teenagers went through the downtown with baseball bats, bashing out the windows in big department stores and chasing off the minimum wage security guards. Looting commenced as predicted.

In the city, another twenty-five pre-teens got on their dirt bikes, each carrying a Big Gulp cup that once contained 48 ounces of sugary soft drink. Now they contained a mix of gasoline, rubbing alcohol and soap. On cue, the kids pulled up to their targets — mostly dumpsters filled with garbage, some heaps of construction material, and a half-dozen abandoned buildings — and lit the single cigarettes they carried behind their right ears. After four minutes of puffing, they hurled their drinks into the target where the fluid spread, waited ten seconds and tossed in the cigarette ember.

Columns of smoke encircled the bay area. The third part of the children’s crusade then did their work. Two dozen kids on bikes carried 7/16 inch wrenches and telephones with their wires frayed and connected to alligator clips. They rode into the ghettos and crept into the back lots of corner houses. There they opened phone boxes and connected the clips, then made calls to 911. Each call claimed either a hostage situation or hostile skinhead domestic violence; each originated at the pair of wires linked to a crack house or meth lab. Hanging up, they peeled off their gloves and vanished into the suburban maze.

The first police car to arrive at a home contained two career cops thinking they were responding to a domestic violence event. They walked up to a door and stood on either side of it as they knocked. Inside, Marvin Gutierrez-Jefferson panicked. “It’s the pigs,” he shrieked. “Let’s get out of here.” But he hadn’t counted on his partner of eleven days being high out of his mind on cocaine freebase, which only made sense since this was a crack house. Sweeping from left to right, Alonso unleashed rounds from his Tec-9 as the cops dove for the floor and returned fire. Stray bullets dropped an old woman watering her lawn. Other houses responded similarly, firing back with assault weapons and shotguns. Soon the police control room was a mass of red lights as well.

The children having done their part, the young men took over. Riding four abreast on the 280, the attackers nursed their junkers into position and then in unison dropped to 25 miles an hour. Traffic piled up behind them as angry horns rang out. At the last exit before the city, another six cars joined them and slowed the mass to a stop, parking to cover all lanes and shoulders two cars deep. As the young men exited, they poured gasoline over the cars and then set them ablaze. Columns of dark smoke reached toward the sky.

At crucial intersections within the city, other beat-up ancient vehicles crept into place and were set ablaze as well. As this smoke joined the others, six young men disgorged from buildings in the downtown area with AK-47s that had come over the border from Mexico with a palette of drugs. Setting these to fully automatic, they aimed at the gathering crowds and dropped to their knees as their fired. Ambulances drove over sidewalks trying to get to the sites.

In rooms sealed with tinfoil to keep them nocturnally dark, young men launched programs from their computer keyboards. These systematically attacked and exploited weaknesses in the county and federal services including welfare. As EBT cards shut down and medical services were denied, the rioters gathered in the streets. A lack of air conditioning and absent police encouraged them further, as did the sudden appearance of boxes of guns and molotov cocktails. Soon the Mission district saw two decades of gentrification unravel in an hour.

At Google’s Mountain View data center, Nguyen Rosenberg-Gonzales fired up a Skype connection to his boss. “We’ve got another twenty four hours of fuel on the generators, but after that we’re cratered. We’re getting a delivery now,” he said, going to the window. As the laden fuel truck turned down the drive, another drone zoomed out of the woods, controlled by a young man who had honed his skills with thousands of hours of video games. It contained a single package: a fragile glass container carrying a mixture of chemicals which responded to air, packed with magnesium. Taking time to make his approach right, he dropped it on the fuel truck stopped at the gate from a distance of ten feet. The glass shattered, fluid spread, the security guard and truck driver fled as the blaze consumed the cabin and more importantly, connectors. As the silver canister fireballed, Rosenberg-Gonzales returned to his phone. Where were the cops?

Twenty hours later, the situation was much the same. No truck driver would take a load to the fuel centers after what happened to five of their trucks, including one horrific fatality. The unexpected load of the rest of the world looking for news on the tragedy drove the machines in the server centers harder than usual, and they began running out of fuel early. As the new morning rose, the data centers of the world’s biggest industry began to blink out one by one.

This caught the market in its early morning frenzy of worry about the events in California. As the data centers crashed, so did ad revenue and so did worth. Pundits had glossed over how much of America’s economy was dependent on the dot-com bonanza, but now this became apparent as sell orders cascaded through US and European markets. In China, terrorist attacks on four buses depressed values further. Soon the entire global financial system dropped into freefall, and riots began in the capitals of the world. Militaries went on to high alert, provoking a half-dozen border skirmishes. But the average person simply watched as his net worth plummeted and hoped to avoid the dragnet of layoffs that would follow that afternoon.