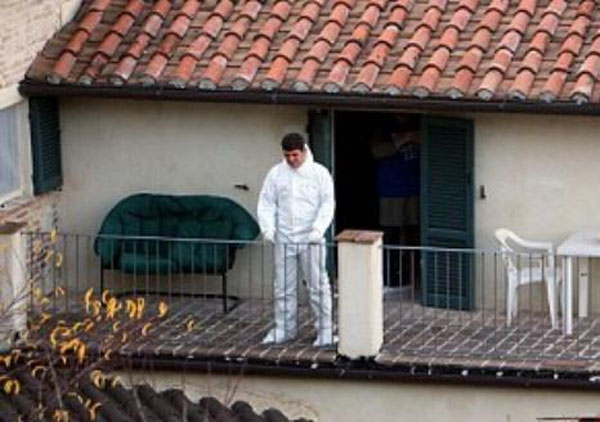 CNN finds a writer willing to acknowledge the racial dimension to the Amanda Knox case:

From that interview and many more, I pieced together a picture of a young man who seemed to be acting out some sort of fantasy of a home, a fantasy that perhaps abruptly cracked when Meredith Kercher came home unexpectedly while he was burgling her house, and unwittingly locked herself into the house with him. (Guede has maintained “whoever committed this terrible crime is still free.”)

I believe one reason for the lack of interest in this young man is that a man killing a woman is mundane and boring, compared with the more titillating image of women fighting and killing each other. The other reason, sadly, is a kind of reverse racism. He’s black, and innocent black men are far too often railroaded in white systems, Italian and American. To suggest that this young man might have been the lone killer has a taint of political incorrectness.

Caucasians tip-toe around minority crime because we’re taught by our Marxists, who hate the majority and want to destroy it, that the majority is guilty of oppression and thus deserves payback.

There’s two racial dimensions here: first, Meredith Kercher was half-Indian and half-English. Second, her killer Rudy Guede was an African in Europe who had a history of mental health problems, crime, and drug use.

We have two sacred cows. What do we do?

Blame whitey, of course. Sollecito and Knox looked like normal, upper-half of middle class white kids. These are the enemy, as far as Marxism is concerned. People who are of minority status or mixed-race are taught that this enemy oppresses them.

When the Kerchers found out their daughter had been raped, strangled and stabbed until she bled out, they knew they had to blame someone. Guede was not enough; that broke the narrative. They needed to find an oppressor to blame.

This is the nature of diversity. It turns politics into majority versus minority. If you’re in Israel, the minority is Palestinians. If you’re in China, it’s Koreans. Whoever the minority group is, they will use guilt as a weapon against the majority.

It’s time for majority groups to realize that these accusations are spurious. They are convenient because people accept them. It’s time to stop accepting them. Cast aside guilt and pity, which are two sides of the same coin, and realize it’s OK to represent your own (majority) interests.

Everyone else is representing their interests, and they don’t care if you’re wrongly accused.

Anti-Americanism jumps the shark | Dualism vs. Monism in a Nihilist Context