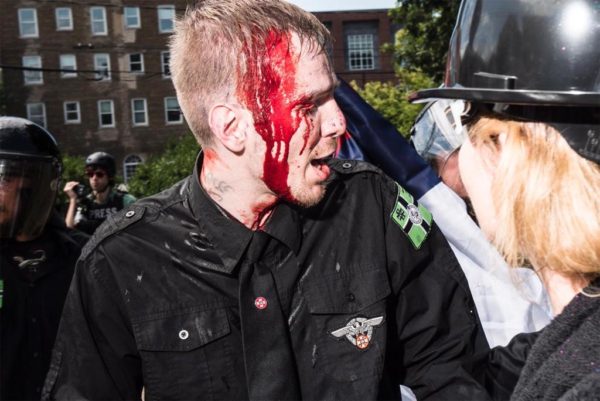 The Left is freaking out. The magic potion is no longer working. It used to be, all they had to do was wave the wand and say “Hitler,” “racist” or “terrorist,” and the whole herd lined up to destroy whoever they were pointing at.

But over the past few years, something interesting has happened. Some of the people of the West have broken away, and have begun not just criticizing our government, but the theory that puts it in power known as “equality.” They are suggesting that not only have we lost our roots, but we got it wrong all along the way, maybe for centuries.

And with Charlottesville turning into a bloodbath after several other cities have experienced the violence, disorder and vandalism of Antifa rage, something worse is happening for those in power, which is the defection of the 47%. If you remember Mitt Romney, he was the Republican candidate who behind closed doors claimed that the 47% of the country which pays all the bills wants to cut out those who take but do not give, which is the other 53% or some large portion of it. Mitt was doing fine until he apologized for that statement, at which point all the conservatives packed up and went home. But now, the 47% is coming back into play.

To understand them, you have to understand average people versus productive people. Average people do not really exist, but for most people, they go to a job and do what they are told, then come home and watch video or play games, then go back and do it again. This is life for them because it is what they are capable of doing.

Productive people on the other hand are self-driven. If they are part of an office, they stand out in the topography of people by doing more or being better or faster at something. For them, there must always be purpose and a goal, and if they are going to spend their time on something, they will try to do it reasonably well.

Between the productive people and many of the average people, there are people who are trying to contribute at whatever level they can. These are the 47% and they are not all affluent. They are just highly functional. However, they are offset with a huge population that can be barely handle simple jobs, does them poorly when it does, and lives off either government benefits or the creations of government, like bureaucrats who take all day to process simple forms, or people who live on welfare for multiple months, years and generations.

For a long time now, the 47% has been mostly hostile to the Right. To these people, Right-wing philosophies were the zone of gun nuts, bigots, throwbacks, and other dangerous people. But now two things are happening: first, mainstream Leftism, which has dominated America and Europe since 1945, is failing; second, the Right is making a lot of sense about getting to the root of this problem and avoiding ever making that mistake again.

Look at our democracies. They are bankrupt and deep in debt. Our governments constantly grow and give benefits and money to the wrong people, resulting in a society with many parasites and few producers. Our societies are starting to be terrible, too, because now to escape the disaster of urban blight and community rot, you have to buy your way into a gated community just like in the third world. Our art, movies, culture and literature are not just vapid and bad, but controlling in the way Soviet propaganda was. People are catching the realization that any form of Leftism, whether simply democracy or committed socialism, arrives at the same place the French Revolution did, which is that everyone is starving, anyone smart gets killed, and then you end up fighting ideological wars that end in the collapse of your nation.

The 47% are not switching to the Alt Right. No, they wait for a convincing reason to do that, mainly an explanation of how the Alt Right will get us out of this mess and to something better. But they realize that we are in a death spiral, and they are starting to see that this has been happening for a long time. They are watching less Hollywood and NFL and spending more time reading weird blogs about Plato and Huntington. They no longer trust the government, and as they saw in Charlottesville, perceive that it is working with these angry violent Leftist protesters who seem to be motivated only by an impulse to destroy. They realize that we are in bad hands, and that we will have to stir ourselves from the sofas and fight back against this, or it will bury us.

The media is losing control of the narrative. They thought they had an easy spin when they got photos of the Charlottesville death car driver at a Vanguard America protest. However, then videos came out which showed people hitting his car, and it became clear that he did not aim for the people who were injured or died, but drove crazily until he hit the car in front of him, smashing up the sports car which was his pride and joy. This was not “terrorism,” as the media spun it, but out of control panic brought on by Antifa committing crimes and the police either ignoring them or helping them. Maybe he stood with the Vanguard America fellows, but they did not know him, and he was not a member, as even the Leftist press was forced to admit:

On Twitter on Saturday night, Vanguard America denied that Fields was a member, despite his presence with the group, and his uniform dress, saying that â€œshields were freely handed out to anyone in attendanceâ€.

It is worth mentioning that their “uniform” — although The Guardian will not tell you this — was a white polo shirt. He could have worn one to work and showed up randomly for all that we know, but somehow the press is not digging too deeply, only searching for facts to support their narrative that he was a terrorist who deliberately ran these people down.

And then there’s the video that explains why the driver panicked and crashed into another car:

Researchers on /pol/ corroborate the theory that the driver was not acting maliciously and was scared. Read more: https://t.co/iQdPCd0jSq pic.twitter.com/upYVjruaxv

In the meantime, it turns out that he was not a committed member of the Alt Right, but another lost soul wandering through life in search of purpose despite having mental health problems:

Weimer also said that Fields Jr. wanted to go into military service but was rejected on mental health grounds.

â€œHis senior year, he was real gung-ho about joining the Army,â€ Weimer said. â€œAnd he, towards the end of the year, found out that he was denied, and it was because of a history of anti-psychotic mediation that he was prescribed.â€

Before Saturdayâ€™s attack, Fields Jr. had recently moved to Ohio from where he grew up in northern Kentucky. His mother, Samantha Bloom, said she knew her son was attending a rally in Virginia but didnâ€™t know it was a white supremacist march, reports the Associated Press.

Not to mention that, but his Jewish mother, who appears to have health problems of her own, relied on her son to take care of her. This is not the raging Nazi that the media wants to portray him as, nor does he look like someone who committed “automotive terrorism” deliberately. More likely, in a chaotic situation, a chaotic personality flailed out of control when he came under attack (see video above).

In the meantime, Antifa and other Leftist counter-demonstrators (the Alt Right, having legitimate license for their demonstration which they had planned months in advance) had been attacking all afternoon with zero penalty, and the police stood down for them or actively helped them, herding the Alt Right protesters into Antifa kill zones.

So when we see images of bloodied Antifa, the press narrative is, “Look, the Alt Right attacked.” The 47% — contributors — in America are not saying they believe the Alt Right entirely, but they are saying they no longer believe the media spin. They are simply skeptical. They have seen this before. Michael Brown and Trayvon Martin turn out to be bad guys after all; the violence in Portland and Berkeley turns out to have been started by Antifa, after all.

When the middle defects from the Left, even if they do not go to the Right, the Alt Right wins because it has shattered the illusion of consensus behind our Leftist government, Antifa, the Democrats, and democracy, equality and Leftism themselves. People have doubt. Just like citizens under the Soviet regime, they no longer trust official sources, and so they are not going to stand in the way of the counter-revolution.

People are starting to see that so much is fake. We live in a Potemkin economy. Our leaders are actors. Our ideology is based on class warfare, not “helping people” as they claim it is. And these Antifa and Leftist types are fake. Their lives are not happy. They are not good people, or people striving to contribute. They are angry, empty, lost fake people just looking for an excuse to destroy and maim anything and anyone good, honest, healthy or moral in their path.

It’s all fake, even the outrage:

But others, including Mr. Kessler and Ms. Caine-Conley, openly wondered if the violence could have been prevented.

â€œThere was no police presence,â€ Ms. Caine-Conley said. â€œWe were watching people punch each other; people were bleeding all the while police were inside of barricades at the park, watching. It was essentially just brawling on the street and community members trying to protect each other.â€

…Suddenly, people were throwing water bottles, some filled with urine. Some used pepper spray; from his perch on the sixth floor, Mr. Moran saw smoke bombs being thrown. People started clubbing one another. The clergy retreated to a â€œsafe houseâ€ â€” a restaurant nearby.

But according to many witnesses, the police waited to intervene.

Who throws water bottles filled with urine? This has been an Antifa tactic since the post-election riots. Actually, it has been a tactic of the Left since at least the 1960s. But the police failed to intervene when it was Antifa causing the riots. And why might they have stood down? Their goal, spurred by Mayor Signer, was to stop the protest in the first place:

The moment the emergency was declared, police officers started announcing on loudspeakers that the gathering was an unlawful assembly, and called for the crowd to disperse, cutting off the rally before it officially began.

In other words, they wanted a pretext to stop the demonstration from happening, and the police relied on Antifa to give them that excuse, even if the Alt Right had done nothing wrong. The 47% are not going to trust this kind of insanity, and they are starting to speak out more openly as cracks appear in the diversity Potemkin village run for the sake of globalism that our elected leaders, and the 53% who vote them into office, have created.

The Alt Right can keep winning this war by behaving reasonably and provoking the Left into doing what it cannot stop itself from doing, which is launching into pathological destruction, cruelty, deception and manipulation. If they really want to win, they need to convince the one in twenty people who are natural leaders that the Alt Right offers a better vision, and then this system will fall and we can get on to the next phase of human history.