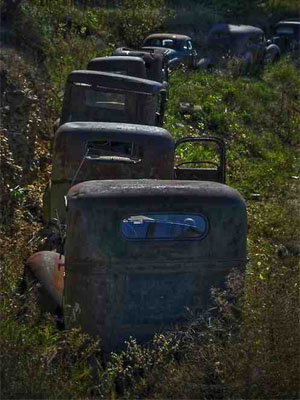 I didn’t become a conservative to defend our glorious social order. In fact, I wanted to destroy it, because it is broken.

The word “broken” implies something with a clear function that it can no longer fulfill. An axe with a shattered handle, a car that’s short a wheel, or… a social system that compels us to pretend to like things we hate. An economy that forces us into pointless labor.

Broken exists on large scale and small. Our government is broken, in that we vote and then the results are never up to snuff. But on the smallest level, interaction with government is broken because it is conducted through stuffy forms and waiting in line.

Everyday life is broken too. Most of the products we use are designed by blockheads, from our computers to our showerheads. Every now and then something good rises above, only to become popular and then get re-introduced in a junkier less effective but more popular version.

Our streets are broken, clogged with traffic jams, and often swollen with people for no reason. The grids we use in our cities almost make sense, except that then all other purposes of the city become secondary to traffic.

Jobs are broken, forcing us to spend far too much of our time on deference to previous laws, regulations, conventions or social norms. We spend way too much of each day on stuff that is unrelated to the job, like status meetings and training.

In the name of tolerance of coworkers, and everyone getting along, daily interaction gets dumbed down to the numbing. In the name of compromise, decision-making is replaced by rote imitation of the past.

The most broken thing about these broken things is that they are considered normal, and beyond any serious criticism. It’s just how things are, we say, and wisely add that they’ve always been this way, on the basis of zero evidence.

Adulthood, once a time of accumulating wisdom, becomes a bitter time of hatred. It’s your job to go to the broken job, put up with the broken people, take home the money. You have to deal with the broken products in stores with broken lines, argue with the incompetent and often insane service providers, keep the house together with its thousands of little research projects — how do you change the water filter on the refrigerator, again? You did this six months ago; how soon we forget — and then yell at the kids to keep them in line. That, too, is broken.

Our society works not because it’s well-designed, but because it’s so broken that everything we do is a hack, workaround, patch job or subversion. A defective society steps aside and immediately surges into irrelevance, which lets us get things done, for a while. Then that society shows its parasitic side and drags us into the broken yet again.

As the sun goes down people drive around; no one wants to go home. The family is broken, since rampant individualism makes love impossible. People space out, drive badly, screw up the lines, dropping things and forgetting important details. It all bogs down.

But it’s almost as if we want it to be broken like this. When all outside the self is dysfunctional and tedious, only the self remains. Nothing then opposes the ego, no matter how broken it is too.