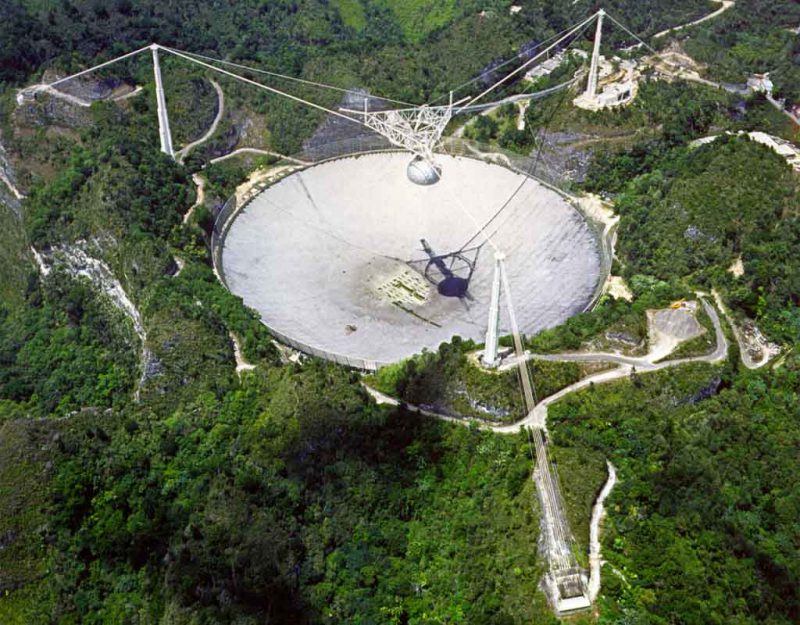 Apparently the observatory at Arecibo, Puerto Rico, collapsed recently because its cables snapped from metal stress. In this we find a metaphor for the era that has prompted the ongoing sea change from egalitarianism to realism.

Back in the hazy postwar era, we rode a high of enthusiasm. Finally, it seemed, we had defeated the really deadly enemy of fascism, and the free world was going to explore the stars, divine the mysteries of science, and create a new golden age of humanity.

We built great telescopes, space ships, and buildings, then lost momentum. It turns out that democracy if not threatened with immediate harm falls into narcissism, and people choose what they as a group think they want, which in all human situations means the suppression of fears.

People want to think that they are living the best life possible, they are safe, and they will have a grand future for themselves without others intervening. Consequently, humans always choose inverted fears when given a choice.

Instead of our fear of poverty, we choose free stuff from government. From our fear of being incompetent, we get equality, or a normalization of incompetence. Our fear of breaking social rules means that we remove culture. Our fear of obligation removes family, faith, and eventually reality itself.

These fears are scapegoats. We need something to blame when things do not turn out well for us, and we can all agree on a few big targets, like the wealthy and powerful, strict social rules, and obligation to anything more than our own urges, desires, fascinations, and accumulation of power.

These external fears replace our need to actually evolve and develop within ourselves, a process called “self-actualization” which means gaining mental clarity and discipline more than the prosaic “maturation” which others encourage. Our inner worlds are scary and ambiguous and we fear being forced to explore them.

Consequently, if you get a group of humans together, they ignore the why behind everything and argue from what individuals want, but as a group. People want essentially anarchy with free food. Anyone who pitches this to a human group will win the election.

This means that we explore space when threatened by the Communist space program, but then, as soon as the threat is gone, resume navel-gazing and dreaming of things that we would do that are not particularly relevant, nor would complete us.

We fear the grim truth that most of life goes on in our heads, and our only safety comes in disciplining what is there so that it is both realistic and always seeks the light, goodness, sanity, adventure, conflict, and evolution. That is conservatism: realism (order) plus a transcendent goal of improvement.

As Bill and Ted said, “Be excellent to each other.” However, most people will focus on the “to each other” instead of the notion of “excellent,” or improving and always aiming for what would make life amazing, rather than “safe.”

Arecibo showed humanity at its best. We wanted to see what was out there and if we were alone in the universe. It achieved great things, but then was left to decay by people who no longer understood how to maintain it.

It is as if we took Gil Scott-Heron to heart:

If translated through human psychology, this poem resounds with an appeal to fear. It fears poverty. It fears being left out. It fears that someone will rise to the stars, leaving the rest of us here to get our act together, self-actualize, and discover real life.

Normal, productive people when they encounter a bad situation work to improve it. They stop doing whatever self-destructive things they were doing and fix what needs fixing, then pursue whatever is doing well for them. Eventually they rise.

Scott-Heron suffers from being in a White society, and being dependent on that society, and while he hates that, seeing it as his only option. His poem basically amounts to a scream of outrage that money is being spent on greatness instead of subsidizing those who are lost.

None of us like poverty, or seeing people in it, but we recognize that it does not occur in a vacuum. That is, one ends up impoverished when one offers little to the world. The solution there lies within the impoverished person, because if they want their situation to change, they must change themselves.

No one wants to change himself. We fear this, because it is the primal fear of all humanity to attempt adaptation and fail, so we do anything we can to push it away, usually in the form of scapegoats. For Gil Scott-Heron, it was the space program.

We listened to him and those like him and changed our focus. Instead of heading to the stars, we looked at all of the fears we had, and started making an all-powerful government to fix those. Welfare checks, free medical care, public schooling, civil rights, equality, and feminism all came out of this.

As a result, during the years since 1963 when the observatory was built, it slowly decayed. Up through the end of the 1990s it was in heavy use and carefully maintained, but then our focus shifted, first to terrorism — only a problem because of diversity — and then diversity itself.

We became fixated not on getting to the moon, but on that lone Black (or other minority, including the Irish) person in his dingy apartment. We spent endlessly. Even more, our focus shifted. Where in the 1960s, our best and brightest aspired to go into the space program, by the 2000s they wanted comfortable corporate jobs connecting refrigerators to Twitter or helping the disenfranchised.

The telescope aged and decayed. It could have been maintained, but that required replacing all of its parts as they passed their operating limit. It required people who could correctly diagnose what needed to be done and understand the engineering behind it. It required massive support from the public.

Our new focus was more concerned with making the staff look like a Netflix reboot — one Black, one Asian, one homosexual, one transgender, and one fat — than it was with getting anything done. Our focus was not the stars, but ourselves, or rather, our fears.

All Late Stage Democracies go out this way. They crumble into ruins because no one is concerned with maintaining civilization, only in parceling out the wealth and power so that “everyone” feels accepted, validated, represented, and otherwise “equal.” We focus on ourselves and find only the worst.

As said many times before, humans in groups focus on what they have in common, which is fear of insufficiency. Consequently, they wage war against sufficiency, and make everyone dependent on a system which wastes all of their time doing nothing important while neglecting real issues.

Our species always needs a goal to shoot for, something to aspire to as opposed to merely reacting to. That includes space travel, but also more learning, refinement of past knowledge, and preservation of the best of human endeavor, as conservatives seek to do.

We have wasted our potential because we were ruled by fear. The solution is not to find another enemy, but to stop focusing on negativity, and instead to look toward improvement. This will not be popular like free stuff and anarchy, but at least, it is real.