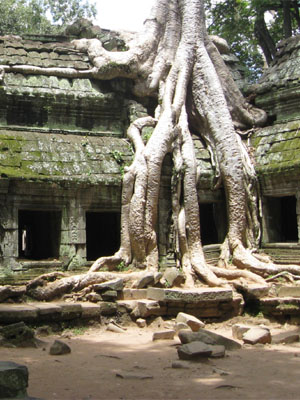 Recently a new article appeared on CNN about the old temple Angkor Wat in Cambodia. Archaeologists have published a new map over the area, revealing that Angkor Wat wasn’t just a temple, but once an ancient city comprised of complex infrastructure and residential housing. The overwhelming beauty of this place and the fantastic architectural skills possessed by those who built it, are however obscured by a dark conclusion from the archaeologists: the city fell apart due to environmental catastrophes.

The size of the original city residence and the highly complex water management system, seem to have led to an overexploitation and deforestation of the natural resources around the area. One can imagine the crisis that went on during the time of its fall: too many people crammed in at a space too small, combined with a rapid technological and infrastructural development, that on the outside must have seemed to be astounding by the population of that time, unknowing of the future consequences that this development would lead to.

Angkor Wat is a fascinating but scary example of the inherent problem with all social communities that eventually grow to become large societies, or even whole civilizations. When people leave their caves to build new homes, new technology and new social ethics, it’s easy to forget the natural world that they came from. Angkor Wat collapsed internally due to overexploitation of natural resources. Nobody today thinks of the fact that we’re actually still just organic life forms on this planet, dependent on water, food and sunlight to stay alive. We’ve spent too much time in small offices, at supermarkets or by the TV, to catch up with the real world. Suddenly a group of scientists study the climate and find out the horrible truth no one gave a dime about until now: “Oh no, we’ve punctured a hole in the ozone layer!”

To some people this may seem as outright stupid; why didn’t we think of this before? The answer is easy: our civilization, probably like with the ancient Angkor Wat, has forgot about the outside world, too busy upholding a social reality to satisfy the comfort of its citizens. If someone today would point out that we’re too many people consuming way too much resources, he or she would either be hunted down and turned into a lamp shade, or thrown in jail for violating the unquestionable Human Rights. That is, the Right to consume, the Right to take place, the Right to stay alive and live life as the individual sees fit; the Right to live in a self-referential fantasy world where the individual doesn’t have any obligations to the surrounding environment. We’re supposed to be able to take how much we want and dump the garbage at the nearest park or lake, since we’re modern now and don’t need to feel humble in front of nature.

The problem with this happy illusion is that it’s like living inside a bubble; it feels good as long as it lasts, but sooner or later the bubble bursts and the game’s over. What to do? To people living in a comfortable civilization where water, food and entertainment are taken for granted, the outside world is a scary and unequal place. There you have to actually fight just to stay alive for the day. Life is a struggle and this struggle more or less fades out when living in a complex technological society that seems to create food and pleasure out of nothing. Sadly, this is not how things work.

The Angkor Wat syndrome of creating a parallel, social world next to the real world, or reality, usually strucks all civilizations at one point or the other. What defines this syndrome however is that it always appears in decadent societies already going downhill. We see this most clearly in our own time: depression and obesity are on the rise, people spend their time watching TV and chasing careers, corporate businesses manipulate the political leaders into dissolving culture and nation to create one global consumer supermarket, and our values have become selfish and shallow. We’re regressing inwards, but like how it must have been for the citizens of Angkor Wat, most people have no idea what’s going on until it’s too late. That’s the final stage of this disease and those who have anticipated the end all along will patiently wait for the coming collapse, so that a new healthy order can be established upon the ruins of what was once a great empire.

Freedom: root of conservatism? (Part one in a series) | Corruption’s many faces