When your fear rules you, you get worse consequences than you would have by facing what you fear.

Abortion terrified us, because if the death of a fetus becomes a casual option, maybe life is not sacred after all.

Eugenics terrified us, because if someone doesn’t make the cut, maybe there will be mission creep and we won’t, too.

We fear, we fear… we fear the consequences of nature, and we fear man’s ability to stand in for natural selection, something made obsolete by the fact of civilization itself and specialization of labor.

Instead of facing our fear, we denied it. Abortion battles raged and eugenicists were called fascists, racists — whatever, who cares, just some slander powerful enough to shut them down.

But now our technology has caught up with that.

Instead of picking people on the basis of the whole picture, meaning how they turned out as individuals, we’re going to pick them before they are born — by picking genes that are statistically likely to cause problems.

Males with a particular form of gene called MAOA are twice as likely to join a gang, compared to those with other forms, finds a new study of more than 2000 US teens. What’s more, gang members with these mutations are far more likely to use a weapon than other members.

Low MAOA activity has been linked previously to antisocial behaviour in people who experienced child abuse. While two brain regions involved in perceiving and controlling emotions are shrunken in people with no history of criminality or abuse who have the mutation.

This means a fair amount of throwing the baby out with the bathwater, since the same gene that may make teenage gangsters violent might also make someone with other genes an assertive leader. It’s like saying that red heads are more likely to be alcoholics, so we don’t want them — although at the higher end, smart red heads and red heads of Danish ancestry may be some of our best people. Statistics misleads us because it looks at one factor at a time.

If abortion remains illegal, these future citizens will be fertilized outside the mother and then the embryos will be tested; those that have the wrong statistically prevalent genes will not be implanted. Whether they were alive or not, they will be dead.

Welcome to the new science of neo-eugenics:

Every year, 4.1 million babies are born in the USA. On the basis of the well-known risk of Down syndrome, about 6,150 of these babies would be expected to suffer from this genetic condition, which is caused by an extra copy of chromosome 21. In reality, only about 4,370 babies are born with Down syndrome; the others have been aborted during pregnancy. These estimates are based on a prevalence rate of 0.15% and an abortion rate of about 29% of fetuses diagnosed with Down syndrome in Atlanta, GA (Siffel et al, 2004), and Hawaii (Forrester & Merz, 2002)â€”the only two US locations for which reliable data are available. Data from other regions are similar or even higher: 32% of Down syndrome fetuses were aborted in Western Australia (Bourke et al, 2005); 75% in South Australia (Cheffins et al, 2000); 80% in Taiwan (Jou et al, 2005); and 85% in Paris, France (Khoshnood et al, 2004). Despite this trend, the total number of babies born with Down syndrome is not declining in most industrialized nations because both the number of older mothers and the conception rate is increasing.

These abortions are eugenic in both intention and effectâ€”that is, their purpose is to eliminate a genetically defective fetus and thus allow for a genetically superior child in a subsequent pregnancy. This is a harsh way of phrasing it; another way is to say that parents just want to have healthy children. Nevertheless, however it is phrased, the conclusion is starkly unavoidable: terminating the pregnancy of a genetically defective fetus is widespread. Moreover, because none of the countries mentioned above coerce parents into aborting deformed fetuses, these abortionsâ€”which number many thousands each yearâ€”are carried out at the request of the parents, or at least the mothers. This high number of so-called medical abortions shows that many people, in many parts of the world, consider the elimination of a genetically defective fetus to be morally acceptable.

Welcome to what happens when you do not take charge.

While few of us will agree that aborting fetuses who are destined to be retarded or malformed is a bad thing, we can all see that parents are now going to shop for what they want in a child. This could even extend to hair color, eye color, and genes with statistical prevalence of commercially-desired traits: lawyer, doctor, gets along well with others, likes caviar, whatever.

But as we progress in control of our own evolution, look for these lines to blur. People are going to pick what they desire in a child and edit their results to match.

As often happens, science is forcing our hand where our emotional minds are afraid to tread. 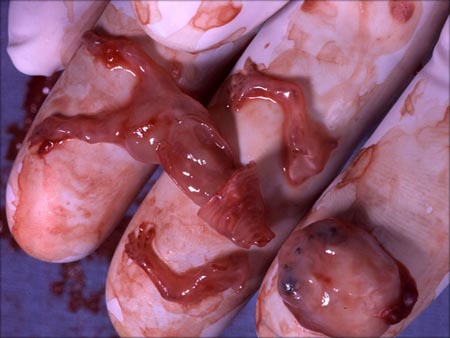 This means that instead of natural selection picking our wiliest and most logical people, we’re boutique shopping for external traits — and not considering the whole mix of traits, since we’re looking at statistical single traits each time.