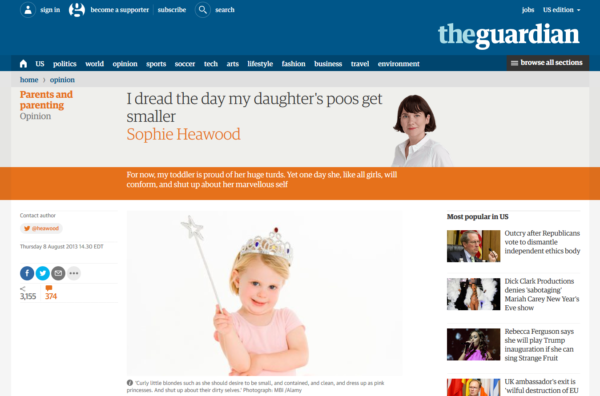 Perhaps the peak of the staggering collective mental health disorder that is Leftism, in its latest incarnation as “SJW” or “social justice warrior” cultural Leftism, occurred in 2013 with this article on the now nearly bankrupt The Guardian platform. In it, a woman bemoans how a desire to be feminine will cause her daughter to lose pride in her large bowel movements.

It is hard to tell if it is more stupid than it is manipulative. The guilt and shame oozes from this article, as does the irritating trope of the brave and sensitive woman doing everything she can for her children to raise them in a manner that contradicts the “ignorance” of the world. But then, in the final article, the fool of a writer contradicts herself:

Of course, it’s no coincidence that her current fixation with size has ballooned while we are on holiday in California…I forgot that what this country would really do to is show her size. Everything in America is so much bigger than it is at home…I watch my child taking all this in with her wide eyes, and listen to her hamming up the dimensions of her bowel movements like a Hollywood producer. Why, she really has absorbed the local culture here in Los Angeles â€“ she takes those little poos of hers and turns them into stars.

Other than the sheer inanity of this writing, it is interesting to watch this person use a trivial event to make a dramatic entrance through virtue signaling, and then write according to the SWPL editorial format which — inspired by America’s National Public Radio — requires in every paragraph “witty” observations that seem “full of life” but are actually fully negative and hopeless.

That makes stringing together a coherent thought secondary to being entertaining for all those single women in horrible jobs out there who are right now raising their wine glasses to this article, feeling better about their poor life decisions and validated in having shared these with others.

Peak SJW came when this formula became standardized and enough people learned to do it that it inundated the media. To translate into conservative terms, it became a new market, and there were enough people to read it that it did not matter that it was dissociative drivel. Internet advertising drove the SJW revolution because newspapers became dependent on internet advertising, and on the internet, no one knows if you are a dog, or even a broke pointless basement dweller clicking furiously on Leftist propaganda to staunch the misery of a self-defeating lifestyle.

Now that several years have passed, we can look back on these days and laugh. The problem is that just as Leftism is one incarnation of Crowdism, SJW is just one incarnation of Leftism, and they will be back, probably with something that seems just as fresh and witty until you realize that it is pure manipulation, soulless and brainless to boot.