Once a Warrior King by David Donovan

Once a Warrior King
by David Donovan
352 pages, Ballantine, $19 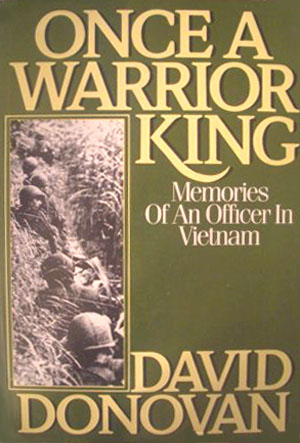 When I was a teenager curious about the world, I found this book, and it entirely changed my outlook on politics. It is a memoir that describes the experience of a soldier who not only confronted the enemy at close quarters, but had an insight into the infrastructure of the war effort and how it was designed. His analysis of the war in this book, which is more about the theory of war and the psychology of winning, showed me how repeated failures come about: through repeated failures of method, which relate to failures of intent.

Donovan, a graduate of the Special Warfare School which taught how to fight and survive in a jungle environment, served in a slightly unusual capacity as the head of a Mobile Advisory Team, which were elite American soldiers who organized Vietnamese soldiers and fought with them in battle. He was closer to the lawless zones as a result and spent his time near the small village of Tram Chim, protecting it and interfacing with the people. Where others had more backup, he had almost none, and had to survive as an integrated part of the people and landscape of Viet Nam.

What strikes me most about this book is how Donovan illustrates that decency and common sense are inextricably tied, and points out that if you want to win a war, you must have an objective and not disintegrate into chaotic or selfish behavior, which he saw in surplus within the military. His morality like that of most people of wisdom — and this book brims with wisdom, if we have no other word for it — is strict in its goals, but not reactionary and silly; it is like a hand reaching for an object in darkness, a feedback loop of feeling a situation out and finding an appropriate response.

The book furnishes us a view of the Viet Cong that rarely makes it in full form into the media, which is as an organization of corrupt outlaws who terrorized villages with murder, booby traps and collection of tributes — more like a Mafia than a fighting force. Equally strongly portrayed are the corrupt aspects of Vietnamese self-government, and the illusory perceptions of an American government distant from the war, a military command trying to govern by wire from air-conditioned offices, and an American public which would rather turn the channel.

As a protagonist, Donovan believes in the fight against communism as a subset of the fight against unworkable and illusory systems and people. He detests the cruel, stupid and pointless as much as the artfully designed destruction of politicians, and recognizes communism as an illusion created to pander to the morally corrupt. However, he never lets himself become the voice of propaganda. He stands between the combatants looking for sanity, one that is based in a fundamental respect for the Vietnamese people and the good Americans he knew, and critical of the illusion on all sides.

For thoughtful people, the only real moral question is “How do I do good, when I must sometimes do evil things to fight evil?” Donovan reveals his ambivalence about killing early in the book, but is alert enough to face it stoically with a kind of zen nihilism that shows he has no illusions about the place any of us individuals serve in the much larger world. He is focused on the goal and much of this book is a meditation on how to find sanity in goals, and how to eliminate the squabbling neurosis that afflicts America now as well as then. This is not political rhetoric, or even religious, but common sense insight into human psychology, and it’s one reason this book is such a memorable read.

Any person wanting to study the Viet Nam conflict will benefit from the illustration of tactics on the ground, intelligently linked to revelations of the mentality behind those who fought the war. Donovan ties together mentation with action and results, spinning his yarn through anecdotes interrupted by critical thinking about the American war effort and its effect on its soldiers. While this book does not have the dramatic flair that many, like James Webb, have inserted in theirs, it remains vital to those who have read it for its honesty and perception.