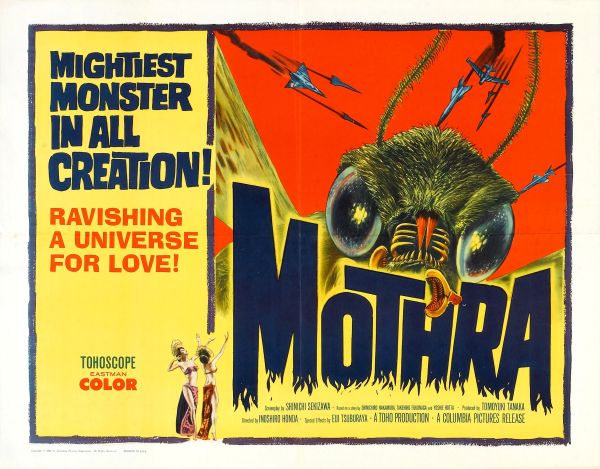 In Texas, there is a tradition of larger-than-life tales where the lonely gentle cowboy is a reminder of the spirit of the listener himself, and the corrupt ol’ sheriff represents all that is within each of us that fears a challenge and detests nonconformity as a possible threat.

The movie Mothra, created in the first generation after WWII, shows us a metaphorical view of the Japanese spirit – imagine, if you are reading this in 2005, that in 1990 a larger nation had defeated your own with a terrible new weapon that obliterated cities in a single stroke. Something against which you could not defend. And then imagine the creative mind turning over that, and inventing something not technological but supernatural which could not be defeated by atomic weaponry, and which in defiance of all rules of money and social prestige was determined to fulfill an ancient, primal rite which took precedence over all that keeps our modern society functioning… thus to your mind, the arrival of Mothra is absolute.

It (she?) is a giant insect with the same unwavering determination that a fingernail-sized moth would have, and its goal is to recover the twin singing girls who are part of an ancient volcanic worship rite on a primitive island. Mothra does not negotiate. Mothra cannot be defeated by the best weapons of the American and Japanese armies, and Mothra destroys cities with a giant wind from her wings that like an atomic shockwave flattens buildings and tosses cars into an untidy mess. While the fools who manage modern Japan show no understanding of the beast, and rely upon their technology, including the atomic heat ray, to defeat it, the only sensible characters in the movie are a pair of Japanese scientists who recognize the simple truth of the situation: Mothra cannot be stopped because her will is purer than ours, thus her intent is clearer, thus the sensible thing to do is to return the singing girls for the volcanic rite.

And with that thought the film’s primary conflict – more fundamental than giant Moth vs. Tokyo – is introduced: the singing girls are six inches high, and thus are an entertainment sensation, and their American “owner,” Mr. Nelson, intends to make himself and his Japanese collaborators wealthy using them. To this movie’s credit, Nelson and company are not portrayed as evil, only selfish, and the rest of the modern society pictured seems to back them up on having that values system. While people hold on to their greed, and to their belief that machines will save them from Mothra, they are lost… those who succeed, spiritually, are those who study the giant moth and figure out what it wants, and expand their minds beyond the limits of the monetary-entertainment world to see why it is that such a thing might be important. Transcendent value, please pick up the white courtesy phone.

The movie expands along this plot line, and culminates in a bizarre transition when the Japanese lead characters go to New York and thus are surrounded by stereotypical Anglos, complete with roughhouse behavior and a somewhat crude, blockhead view of the self as omnipotent. The movie ends by contrasting Christianity to the pagan sun-symbol of the Mothra cult, and finding the latter somehow purer in that it actually solves real world problems, like giant moths crushing New York and Tokyo.

The flustered Americans are shown as victims of their own strength, as if the same disease that led them to repeatedly nuke Japan had infected them with a fatal inability to grasp reality (for anyone who has ever thought that America should burn in hell for its nuclear terrorism, inside this movie is a subtle hint that hell is a state of mind and it is already here). It is a poignant metaphor for modern times, and had this reviewer wishing that Mothra would appear to deliver us all from the hideous menace of our own greed and self-image causing us to deny nature and all realistic value in life. This reviewer found himself lost in the symbolism, and inclined to watch the skies more carefully – more hopefully, even.