It Cannot Be Stormed by Ernst von Salomon 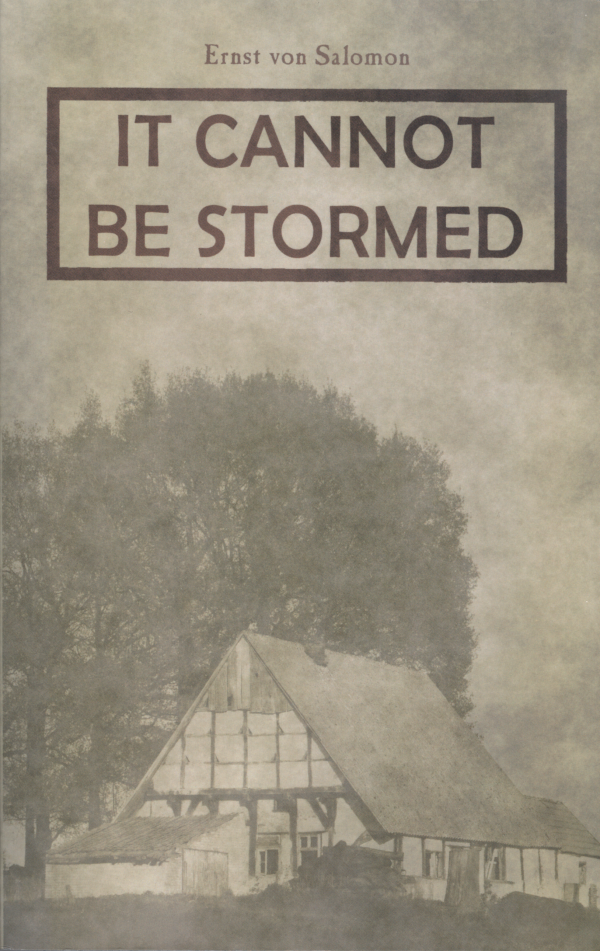 Like many of the best books, It Cannot Be Stormed takes some time to get into: it is a dense tome which requires some hearty work by the reader in interpreting what is unsaid, and is punctuated by lengthy passages of political and philosophical analysis which read more like a treatise on human thriving than an explication of the utter chaos that was Germany between the wars.

The narrative follows a former soldier named Iversen, or Ive to his friends, who finds himself working as a polemic journalist in defense of a union of farmers who are under assault by the government through taxation which is steadily displacing them from the land. The government, which needs money to pay the intense war reparations levied on it by the victorious allied powers, squeezes its independent farmers dry, and their resistance is the central chain of events in the story.

Written in a distinctively European style, the book is not description/event-based like American and British literature, but centers itself in the mental processes of its characters. For that reason, there is very little description of objects, places and events from their details, which makes it a challenge for a modern reader to visualize. An obvious comparison in style might be Knut Hamsun, whose Growth Of The Soil follows a similar pattern of themes, or middle period William Faulkner, although it also compares to recent works by Michel Houellebecq who has a similar internal narrative plus lengthy dialogues on complex topics.

The topic beneath the skin is the failure of “political romanticism,” or the idea that a System can save us and that a political solution can be found through the mechanisms of modern society, an idea against which von Salomon posits the vitality of the soil itself — the connection to the earth, to its cycles, and to practical (not ideological) concerns like providing food and having a life worth enjoying. He describes modern society and democracy as if they are one and the same, pointing out how each distracts people from the actual tasks of life into a zone of fascination with proxies, symbols, signals and appearances.

The farm represented life, the continuity of life, subject to every phase. There came a time when the farmer no longer wanted to be a farmer: he called himself a landowner, or an agriculturalist. Something entered into his life which was not of the essence of the farm, not of the essence of his work, and yet was both profitable to the farm and pleasant. The temptation was small at first and insignificant and yet it expressed the whole situation. Prosperity meant cheapness, that was clear. It was ridiculous to waste hard work on preserving objects that could be replaced cheaply. Old chests decayed, old cupboards, which had served for hundreds of years, gave way at the hinges. Then one day there was a bright green carpet in the house, a linen cupboard and an expanding bookcase; a stiff, grand drawing-room with an upholstered sofa and a plate-glass mirror…the farmer had become a landowner, he was modern, he had to be modern. (39)

As in a classical symphony, the book states its nascent theme early on and develops this later through its negative space silhouette in the different ideologies that roiled Germany between the wars, most notably Communism and National Socialist, but von Salomon also includes other forces at work, like bourgeois oblivion, city degeneracy, trade unions and the power of Government as visualized through the police. Like a travelogue of a subtle hell, the book rotates through these different options and carries each one to its logical conclusion, showing its appeal on Ive but its fundamental emptiness in its failure to restore the soil, organicism and growth.

Written in a style that evokes the Romantic novels of previous ages, but with a strangely technological approach to its arguments, It Cannot Be Stormed communicates through the absence of vital things rather than characters identifying with them. Ive starts from a knowledge of why the farms need defending, but then goes looking for a method of doing this which is secondary to the event itself, and so becomes involved in politics as he moves into the town in order to understand it. Like themes from Faulkner, the town and the city show up as a corrupting influence of a “tragedy of the commons” type: people, acting in self-interest and as channeled by the needs of social organization based on anonymity, become independent forces that achieve the same result across a wide range of situations.

But the farming community has from the very beginning had at its disposal the most important means of production, the soil, and is striving to make a livelihood from it. Under the auspices of the individualist method the farmer has become less and less able to do this, even when he has by partial renunciation of, but still in pursuance of, the method, sought to organize on a co-operative basis. (190)

This passage gracefully makes the point that when people are pointed toward goals that are both transcendental and practical and thus beyond the self, they can achieve great things, but once individualism intervenes, people become agents of their own destruction. This pattern repeats throughout the book, including through the ultimate destination of its protagonist, as people prove unable to connect to the basic agenda of survival and thriving because they are seeking answers in something the group provides through individual interest.

Ive encounters numerous sympathetic characters — the Nationalist student, the Jewish doctor, the Communist street fighter, the melancholy artist — and in each sees the effects of this mental pathology as they try to find reasoning to work around the obvious, but cannot use social means to justify what is ultimately a post-human realization. As each character tries to assert himself or herself, a sense of victimhood and negativity suffuses them, and they either self-destruct or drift off into various types of mental oblivion.

It Cannot Be Stormed provides a challenging reading experience because it is equal parts a sentimental journey through a ruined land, and an intense analysis of the different options offered up by that time, with a view to the subtlety of meaning and the finer details where what “seem” like solid, mentally-cognizable word-structures become inapplicable or miss the point. There are not really any bad characters in this book, only people doing what they think is correct according to their programming and sense of self-importance, which results in disaster as the self and idea converge and produce illusion.

In consequence of its desire to be thorough, this book wanders through the world of political ideals much as its character drifts between social settings. The latter half in particular might provide rough grist for many readers, but it is worth laboring through, as in each analysis the characters reveal both themselves and the limits of the thought-constructs they have pieced together to use as shield and hope against the chaos swarming from within in Germany. Poignant, accurate and often revelatory, this book shows us where to look for renewal through a tour of the ruins of the past.