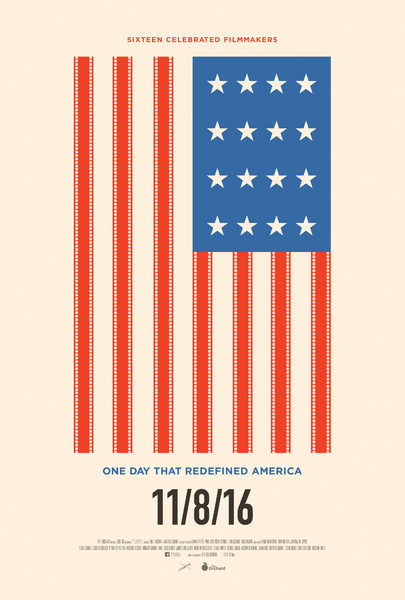 In every Netflix queue, somewhere a documentary appears and in weak moments, one is tempted to watch it. Such was the case with 11/8/16, the second project of this nature from its director, which set sixteen directors to work following individuals on the morning of the election which transferred power to Donald J. Trump.

If this documentary has a theme, it consists of two parts: first, that “a five minute conversation with the average voter” will shock and horrify anyone expecting logic or sense, and second, that America is so fundamentally divided and its identity politics have become so narcissistic that there is no way that the center can hold. This nation-state is coming apart.

The various camera streams follow a Sikh cab driver in New York, an independent businessman in Massachusetts, a politically-active Mormon lady in Utah, a squeaky low-testosterone Irish union leader, a political consultant for the Clinton campaign and an editor at the Los Angeles Times, among others. Each of these reveal entirely polarizing views that are part of their personal identities, to the point that giving up those views would lead to existential distress.

More intensely, the cameras reveal how few of these views are based in fact, and how much self-interest comes into play, which sets the varying groups against each other. The Leftists who make their money in Leftist businesses oppose any power to anyone else; the construction union seems to care only about what government projects will bring it money; the small businessman is interested in his bottom line.

This is where the five-minute conversation with the average voter is most poignant: there is a lack of awareness of any larger issues, or any future past the immediate, that makes one see why democracy destroys civilizations. No one is watching the world ahead, but instead they are reacting to a self-referential system, trying to make what already exists work in the short term, instead of redesigning it for the long term.

As with most documentaries, this one is boring and maudlin, mainly because the density of information is quite low as we watch Americans have relatively unscripted conversations about issues they have no hope of understanding. But it reveals the basis of identity politics in America, which is not so much the group, but the benefit to the individual from acts that benefit the group.

While you might fall asleep watching this, memorable moments of clash between cultures and worlds show us the future of America, which is not unity nor strength through disunity, but fragmentation into groups which want to support themselves and are willing to do so at the expense of all others.

In this, finally, we see some honesty about the prospects of democracy: where each vote represents self-interest, people become more self-interested, and then form little gangs of those like them to enforce this self-interest against other groups. This film about a contentious election serves to reveal the source of the contention that culminated in the election more than any sense of group participation.

Through that we see that America has finished itself off the way ancient Greece and Rome did, which is by creating an emphasis on individualism that works through a self-referential system, with the needs of the many steadily driving any conversation about reality out the window. The runaway train chases a phantom, and no one will be paying attention when it runs off the rails.

Understanding The Constitutional Notion of “Equality” | After The Latest Mass Shooting, It Is Time To Have A Conversation About Population Quality