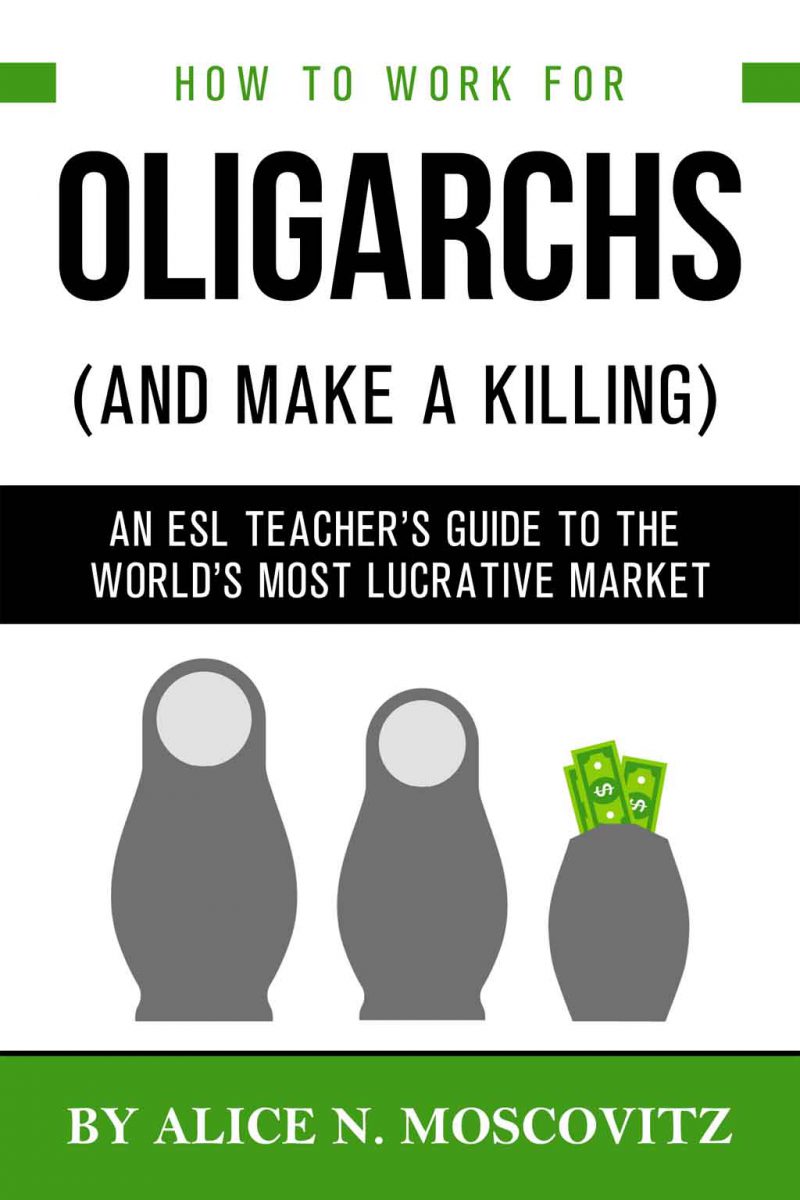 In the 1990s, the Soviet Union fell, and the fragmented members of that former empire did their best to develop modern economic systems. Owing to old Eurasian methods of patronage, and the dividing up of state assets by former Communists, this created an environment where some dominated industry to such a massive degree that they were called “oligarchs.” Writer Alice N. Moscovitz, author of How To Work For Oligarchs (And Make A Killing), has made a career of working with the new Russian elites, and shares her experience here.

How did you get started in speaking and writing in English?

Ironically, one of the selling points in my book is that some jobs working for oligarchs provide a lot of (paid) free time. It was during that free time that I first began to write.

Do you mind working for oligarchs, or does it get disturbing or frightening sometimes?

People often question this, and I did include important disclaimers in the book. However, at the end of the day, the super-rich are just people too. I’ve studied Russian language and culture for years and adore Russia, and this can go far to build rapport with just around anyone.

I’ve often read statements and interviews from the Russian elite, and genuinely respect many of their views. This can go a long way with working well there.

Why did you write this book?

When I first moved to Russia to teach ESL, I had no idea there were so many lucrative positions. I wasn’t able to pursue the opportunities until my late twenties; then personal issues necessitated my repatriation to America after two years. I think I could have achieved more if I had a book informing me of the opportunities sooner.

I know other individuals (referenced in the book) who utilized their time in Russia and repatriated with small fortunes, able to retire, start businesses and buy homes in cash.

I’ve written the book I wish had existed for me, helping others to achieve more than I was able to.

What can people expect to find in it?

This book is a succinct how-to manual for accessing the most lucrative work available in Russia. It provides advice for the following:

The book is written in such a way that each chapter can be read in any order.

How has Russia changed during the time you have observed it?

Russia is the most compelling country I’ve ever seen. There is an unencapsulated idealism countered by brutal challenges. We often reference Russia as the last frontier of traditionalism; while this concept is somewhat true it is incomplete.

Post-Soviet Russia is certainly struggling with an identity crisis; I am busy with other works delving deeper into this phenomenon. The most serious divide may be between the Soviet generation and the millennial generation, raised entirely in “capitalism.”

It was incredibly refreshing to experience a culture with such unabashed nationalism. The nationalist thread runs from the elite to the homeless. If Russia doesn’t know what it is now, it at least knows what it was. Russia is unapologetically united in embracing its Eastern European roots.

How can people keep track of news about your work?

I’m hoping to develop a website soon. In the meantime, I hope to share my work on Amerika first, so keep an eye out for me here. If you wish to reach me, you can do so at [email protected].