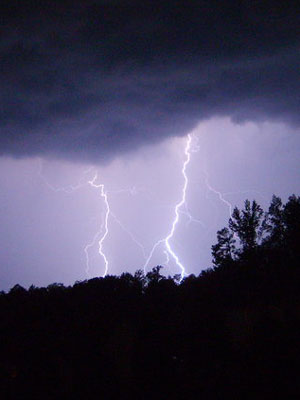 Why is it we enjoy thunderstorms, hurricanes, tornadoes and blizzards so much? Even if they are disastrous, even if our day is ruined, even if people die, we secretly enjoy them. Why?

We enjoy them because we are reminded that we are not really in control. Secretly we donâ€™t want to be in control. We love to not be responsible; we love to be at the mercy of fate.

The Greeks were really on to something. How sad it is to relegate The Iliad to mere artifact from the past, its only destiny to be â€œanalyzed,â€ catalogued and put in a museum. We are so busy with meaningless time-wasters that we have no time to answer the questions of the child. Even Plato, the most rational of men, knew that there was more to reality than meets the eye. Intellectuals isolate parts of The Republic because they are â€œuseful,â€ but do not forget that trippy ending in Book X. Even Socrates had to resort to narrative.

So perhaps even knowledge, logic, and our rational faculties have a limit. Perhaps this is why so many great men and so many great civilizations have posited and assumed there is a God.

First principles and beginning assumptions are incredibly important, even if impossible to answer, because everything descends from that. It is not surprising, then, that when it is assumed and posited that the universe created itself out of nothing, that the individual assumes they create themselves out of nothing. We are not talking about the material body. We are talking about essence: personality, talents, role in life, and duty.

Do you want to get to the root cause of things? Let us posit a Big Bang. But the Big Bang, or spontaneous manifestation, is the ultimate non-root cause, as it is not a cause whatsoever. Do you not see how this assumption parallels the supposed futility of life, existential angst, and general purposelessness?

Furthermore, this notion of spontaneous manifestation is just as miraculous as a God creating the universe. All we are really doing here is substituting terms. I have long maintained that science is merely different vocabulary and brings us no closer to understanding.

When I was a child, I always asked my parents, â€œWhy did God always talk to everyone back then in the days of the Bible? How come God doesnâ€™t seem to talk to anyone anymore?â€ I never received an adequate answer to my impossible question! A cute story, but itâ€™s more than that. As far as a general outlook on life goes, a childish curiosity slays all analysis, science, knowledge, proof, facts, data, and information. There are more questions than answers and the question is always much more powerful than the answer.

People say that the imagination is not real, that a story is not real, or that a film is not real. But that is not true at all. That is lazy language. All of these things are real. A story may be mythical, a film may be fictional, the imagination may be fantastical, but this is not the same as unreal.

What is supremely realistic must take into account myth, fantasy, and the unknown. A fictional film is real insofar as you are literally watching it, you are not dreaming, you are not in another world, the film was filmed on actual film, an actual person wrote an actual story, you are perceiving the story with your eyes, your mind and your mindâ€™s eye. Even dreams, themselves, are real! Do not confuse this with the unreal.

The non-fictional account of reality and the creation of the universe are weak precisely because they imply these categories of existence and life are essentially a â€œmistake.â€ They deny imagination and phantasmagoria â€“ yet these things are possible and experienced literally every day by human beings. The implication is that they are a bug, not a feature.

In my article Jury Duty I critique doubt. And now you may say, but if you are positing that the fictional is real and that the imagination is real arenâ€™t you contradicting yourself? Doesnâ€™t the imagination and possibility of supernatural account cast doubt on the reality of reality?

Not at all, it is precisely the opposite assumption that casts perpetual doubt. When it is assumed that all things are knowable and must be known, outside of the realm of imagination and filling in the blanks, then what happens is man waits and waits and waits for quintessential knowledge. He can keep imagining a possibility for doubt.

A man may commit a crime on camera, but the irrational insistence on quintessential knowledge forces him to ask: but is this video of the crime real? How do I know this isnâ€™t edited? How do I know this isnâ€™t all a set up? When one posits mystery and the unknown then one is not in doubt, because one knows that an element of doubt is already worked into the equation and that this is nothing to be frightened of. This is why I say doubt the doubters and be skeptical of skepticism. What is supremely realistic is to posit mystery and the unknown as the basis of reality.

In fact, rationalizing reality is not befitting of reality. This is not a matter of deluding oneself and there is really no paradox or contradiction. Man and his faculties are of reality, but they are not synonymous with reality. Reality is a miraculous mystery and only mystery captures the imagination.

As Amerika.org commentator crow has pointed out, a lie is not the same as a belief. A lie is when you assert something that you know is not true. A belief is when you assert something that is not known to be true or untrue. A story operates precisely on this level. A story fills in the blanks of the unknown. It is not a lie. A mythical account or narrative is not untrue. The imagination is not unreal as it operates within reality and we have access to it.

I thoroughly reject all explanations that the origin of religion stems from some need for authoritarian control on the one hand, or the need for some consolation for the wretched on the other. They may, at times, turn into that. But religion and the notion of the Divine stems from logic and it is neither irrational nor mystical. It is not a daydream. When logic hits its limit, you are still left with a question. The only worthy complement to logic is the Divine, anything less than the Divine is an injustice to logic.

Like thunderstorms and blizzards, Divinity reminds us that we are not in control and that we know very little. Thankfully, on the other hand, we are also absolved of total responsibility for the world and perfect explanations of every last thing.

The blight within the right | Gravity and other laws